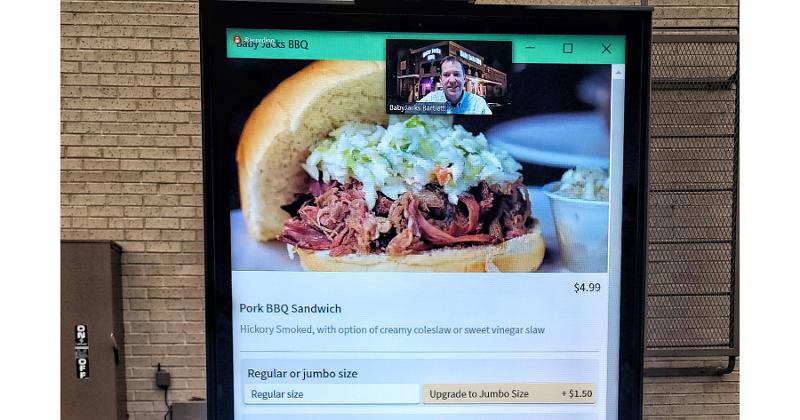 Until about five years ago, Kenzie Williford worked in a restaurant. Then she had her first child and became a stay-at-home mom, putting foodservice behind her to take care of her kids, ages 5 and 2.

But a couple of months ago, Williford heard about an intriguing opportunity: She could work for her old restaurant, Baby Jack’s BBQ in Memphis, without leaving her house.

It came from Will Clem, the co-founder of Baby Jack’s, who in February launched a new company called Bite Ninja that connects restaurants with remote workers who can beam in to the drive-thru during busy periods.

Clem got the idea on a particularly busy Friday night at Baby Jack’s. The restaurant was short-handed, so he propped up his laptop in the drive-thru and started taking orders from his home, on Zoom.

“At the end of the night, we saved the day, but no one even knew that we weren’t in the restaurant,” he said.

Restaurants can call on the company’s team of trained “ninjas” to fill staffing gaps in a pinch and speed up the drive-thru. But perhaps most intriguing for an industry facing monumental hiring challenges is that the service taps into a pool of workers that might not otherwise be looking for restaurant jobs—like stay-at-home moms.

“You can get a really good experienced cashier that there’s no way you’d be able to do it if I asked them to come into the store,” Clem said.

Williford has been picking up three-hour shifts during the lunch or dinner rush, working from a desk in her son’s bedroom or outside, weather-permitting.

“I love doing it,” she said. “I actually enjoy it a lot because it does give me a little time away from my kids.”

Were it not for Bite Ninja, Williford said she wouldn’t be back in the workforce, at least not until her kids got older.

That is how CEO Ware Sykes described the hiring app Seasoned, which launched in Dallas in January. It seeks to match a network of restaurants with job seekers, allowing employers to easily screen applicants and schedule interviews within the app.

It’s an alternative to common hiring tools like Craigslist or the old-fashioned Help Wanted sign, and caters specifically to hourly restaurant workers.

“This is a part of society that has gotten ignored, and restaurants have been dealing with this forever,” Sykes said.

Seasoned conducted a study with consultancy Bain & Co. that found it costs restaurants an average of $650 to hire one person the traditional way, between advertising and the manager’s time. Restaurants pay $249 a month for access to Seasoned.

As of February, it was working with more than 65 brands representing 2,600 locations in Dallas, and Sykes estimated the app was reaching about a third of all prospective applicants.

Also that month, it added Kelli Valade, CEO of restaurant data firm Black Box Intelligence, to its board of directors.

Valade, the former president of Chili’s Grill & Bar, touted Seasoned’s “fast, frictionless” platform, calling it a “more effective tool to bring in employees at a time when hiring is changing rapidly.”

Another app, called Landed, launched in March 2020 and offers a similar suite of Tinder-like tools for connecting restaurants and applicants. Job candidates upload a video of themselves, and Landed’s algorithm evaluates them on more than 50 variables including communication skills and schedule availability before matching them with restaurants.

Large Applebee’s franchisee Apple American, which started using Landed in mid-2020, said the app has cut down the time it takes to hire people and also produced better candidates.

“The managers no longer have to sort through countless applications through various recruiting sites,” said Tina Meyer, human resources field manager for Apple American, in an email. “This is all done for them through Landed, and the interviews are set up automatically for them based on their preferred time.”

Landed expected to be in 20 markets by the end of 2021, and while it would not disclose its number of restaurant clients, it said they had been increasing each month going into what CEO Vivian Wang called “the great rehiring” this summer as customers return to restaurants that cut labor during the pandemic.

“Literally overnight, they need to staff up their restaurant,” she said.

Landed restaurants pay a monthly subscription that starts at $5 a day and depends on what role they’re hiring for and how quickly they need to fill it.

Paradox counts McDonald’s and Papa John’s among its restaurant clients, and like others, its primary goal is to streamline the hiring process. Its AI-driven “hiring assistant,” Olivia, screens applicants and schedules interviews via text message.

By simplifying the process, Paradox also expands the candidate pool, Secrest said. Job seekers can apply 24/7, and Olivia can help them set up an interview in three minutes. She also speaks more than 100 languages, lowering another potential hurdle.

As a result, Paradox’s QSR clients have seen the number of applications increase by triple-digit percentages, Secrest said, while candidate no-shows have dropped.

“It feels like a generation skip by going to this type of technology,” he said. “You’re seeing wildly different results.”

While Paradox and its high-tech cohorts might help find and hire workers faster, they don’t fully address one of the industry’s most troubling obstacles: People don’t seem to want to work in restaurants as much as they used to.

During the pandemic, many have turned to jobs with more stability, fewer health risks and better pay, RB reported earlier this month.

“Essential workers are more exposed to the COVID-19 virus, and that has made hospitality occupations less and less attractive,” John Cleveland, executive chef of Post & Beam in Los Angeles, said. “As a result, people start to figure out another way of life and they move on.”

Until restaurants can solve those problems, there might be only so much technology can do.