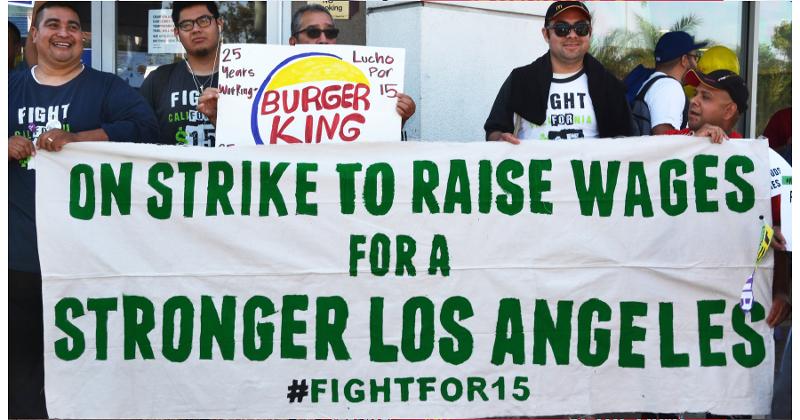 A group representing the pension funds of several major labor unions is pressing six publicly owned restaurant powerhouses to participate in California’s new fast-food wage-setting process instead of trying to kill it.

SOC Investment Group wants the franchisors to seek seats on the new wage-setting council that will be formed under California’s new Fast Act unless a coalition of fast-food chains succeeds in overturning the law through a 2024 ballot initiative.

The law would allow the council to hike the state’s minimum wage for units of large fast-food chains to $22 an hour next year, roughly a 50% rise from the current floor. But if the coalition collects enough signatures by Dec. 4 to get a proposal to kill the law onto the 2024 state ballot, enforcement would be delayed until the voting is held.

Big restaurant chains have been donating millions of dollars to the signature drive.

Instead of taking that route, SOC said Friday, big chains should vie for the four seats on the 10-person council that have been reserved for employers. Two of those four positions will go to fast-food franchisees, and the other two will be given to quick-service franchisors.

Four of the 10 seats are earmarked for fast-food workers and their advocates. Two will be given to workers representing the labor pool, and two are reserved for union representatives, even though Starbucks is the only restaurant chain nationwide that has been even partially organized.

The last two seats will be held by state officials.

The council will also have the power to set baseline working conditions for fast-food workers.

SOC's suggestion was rejected by Save Local Restaurants, the coalition conducting the ballot drive.  It consists of the International Franchise Association, the National Restaurant Association and the U.S. Chamber of Commerce.

"Voters deserve to have a say on the Fast Act given the enormous impact of the law on the daily lives of working Californians<" the coalition said in a statement provided to Restaurant Business. "Our growing and diverse coalition is committed to protecting the livelihoods of workers and local restaurant owners, along with protecting value for consumers facing skyrocketing cost of living increases.”

The standards-setting system set up by the Fast Act is unprecedented in the United States. Tuesday’s elections and the Democratic “trifectas” it created in several state governments—one party controlling the governorship and both chambers of the legislature—is expected to bring the introduction of bills similar to the Fast Act in other states.

Starbucks is one of the six publicly owned restaurant companies that SOC said it has urged to seek the employer seats. The others are McDonald’s; Burger King parent Restaurant Brands International; Taco Bell, KFC and Pizza Hut franchisor Yum Brands; Domino’s; and Wendy’s.

In letters to the six, SOC argued that the council will be good for employers as well as their employees because the involvement of stakeholders will ensure the rules it sets will be real-world and stabilizing factors.

“Fast food companies like McDonald's should therefore embrace the measure and use its influence to stop efforts to undermine the council,” the group said in its letter to the fast-food giant.

The group’s move is part of a larger effort by unions to block restaurant chains’ signature drive. Affiliated groups announced a statewide “strike” against fast-food chains participating in the effort.  The Fast Act was ramrodded into law by the pitched efforts of Service Employees International Union, or SEIU.

Last week, the labor advocates leveled charges that signature collectors are lying to residents about what they’re supporting if they add their names to the petition. The allegations, filed with California’s attorney general, were backed up with secretly taped videos of the signature gatherers telling would-be signers that the petition calls for raising quick-service workers’ wages, not putting a measure on the 2024 ballot to kill the Fast Act.

SOC’s effort could have more weight because of its affiliation with pension funds that claim to hold $250 billion in assets and a large stake in McDonald’s in particular.

Those potential investment funds are the retirement pools of several unions that have formed an alliance called the Strategic Organizing Center. It strives to use its investment potential to influence the governance of public companies.

Update: This version of the story includes input from the Save Local Restaurants Coalition.