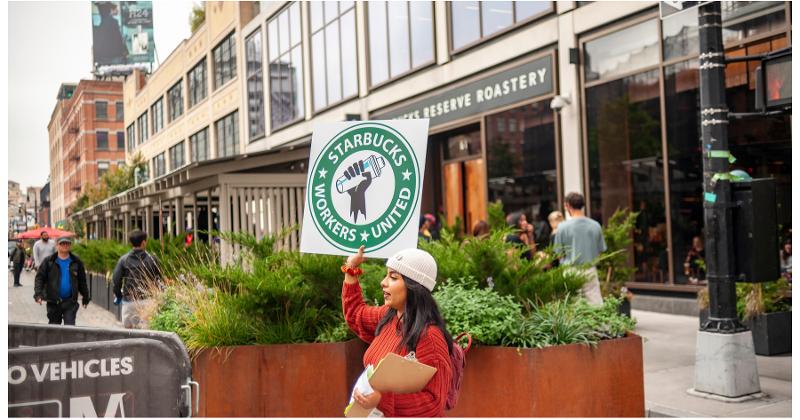 While contract negotiations stagger forward, the union representing employees of about 160 Starbucks units is trying to rouse ill will toward the chain from two of its key constituencies, customers and stockholders.

Part of the effort is an attempt to disrupt a major event on Starbucks’ promotional calendar, Red Cup Day, when customers can get a limited-edition collectible cup sporting a special holiday design. Starbucks Workers Union (SWU) is attempting to hijack Thursday's event by declaring it Red Cup Rebellion day and distributing its own red cups to patrons. Each features a union logo.

SWU says the staffs of 100 units simultaneously walked off the job to raise awareness of their issues with the chain, particularly its scheduling practices. The group contends that shifts are consistently understaffed and that sudden schedule changes make their hours and incomes unpredictable.

"This Red Cup Day, we're organizing for a voice on the job and a true seat at the table," Michelle Eisen, a barista at the Buffalo, N.Y., store that was the first Starbucks to unionize, said in a statement from SWU.

On the eve of Red Cup Day, a union coalition that includes the parent organization of SWU filed a request that the Securities and Exchange Commission investigate one of Starbucks’ financial practices. The advocacy group, the Strategic Organizing Center, alleges in the filing that the corporation isn’t fully informing shareholders about its management of funds that remain on gift cards and other cards that are loaded at the store level with digital cash.

The complaint asserts that management uses the leftover money to improve the financial results it reports to shareholders, a practice that could make the business seem healthier than it actually is.

Because Starbucks’ disclosure of the alleged practice to shareholders is “woefully inadequate,” Starbucks is misleading the investors, the Strategic Organizing Center asserted.

SWU is part of Workers United, an affiliate of the Service Employees International Union, which in turn is one of the three union powerhouses that make up the Center.

Starbucks said in a web posting that it has proposed meeting times with SBU representatives of about 80 stores. It is not known how many of those units are currently engaged in negotiations with the SWU.