The restaurant industry has devoted much time and effort to moving traditional HR procedures online, making workflow more efficient. But many sitting in the C-suite have found that, when soliciting employee feedback, a strict reliance on the Internet won’t work. It’s face-to-face time that gets results, no matter the company’s size. 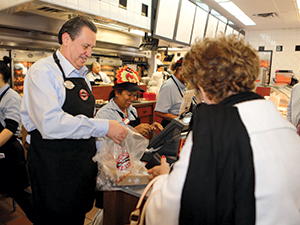 That’s why Jamie Strobino, senior vice president of operations and human resources for Milton, Mass.-based Not Your Average Joe’s, says he spends 80 percent of his time in stores talking to hourlies. “It’s the human piece that makes a difference,” he says. “Anyone can do a survey, but there’s always something deeper that you can only get by talking.”

Getting staffers to open up can be as simple as working on their level. That’s part of why Boston Market CEO George Michel and his team log many in-store hours. “[Employees] get very comfortable sharing thoughts and ideas after working on the line with you for an hour,” says Michel. But a few tricks make feedback more attainable.

At orientation, Strobino hands out Joe’s mission-and-values card, which he off-handedly refers to as a “bullshit card.” He explains, “[Restaurants] all have values, but when the rubber hits the road, do we live up to them? If not, we want [employees] to raise their hand and call B.S.” To encourage this, he enforces an open-door policy with no repercussions for speaking up.

Some hourlies might not initially feel comfortable around execs. That’s why Michel introduces himself as The Big Chicken—the title on his business card. “It gets a laugh and they want to talk to you. It’s a great way to start a conversation,” he says.

Chicago-based Argo Tea is considering a barista advisory board, an idea suggested by a staffer, says Director of Training and Development Amber Williams. The group of employees would discuss menu items, procedures and more, to keep corporate up-to-date on daily store life. “If we don’t truly understand the experience at the front line, we might make a mistake,” she says. Michel launched similar meetings of the minds at Boston Market in 2012 with his campfire-style Big Chicken Chats. He sits in the middle of 12 to 18 store managers for an open discussion, brainstorming cost solutions and ways to deal with guest complaints and sharing positive feedback.

4. Zoom in on the best—and worst

Both Argo and Joe’s execs admit that as the chains grow, spending time in each store is a challenge. “You don’t need to be in all of the restaurants, but you can still go visit markets,” says Michel. Boston Market benchmarks and visits the top 20 restaurants as well as the bottom 20 stores. “As you get bigger, you deal with exceptions on both sides. See what the top does right, then use that learning to help the bottom.”

5. Show their ideas in action

It’s a sense of being heard that Michel says is crucial for honest feedback. It’s not just having a presence in the store, he says. “You have to listen with the intent of doing something.”

6. Decide whether to go public or private

Instead of following the same route as Starbucks’ notoriously public employee forum, Chicago-based Argo Tea decided to go the private route, mainly so it could have a place to communicate proprietary information it wouldn’t share with the public, such as recipes, the employee handbook and training information, says Williams. Via the employee-only website, Argo’s team members have a login to access an open forum for comments, questions and concerns and a section to connect directly with founders, Arsen Avakian and Simon Simonian. The founders make it a point to spend time in stores with employees, and Argo has found that staffers feel more comfortable communicating via web with someone they’ve interacted with in person, versus responding to a faceless member of the corporate team on the other side of the computer, Williams says.

These operators say Olympic-style games are a good way for employees at all levels to innovate and get involved with the brand. Argo holds its Argolympics, a barista competition that the director of food and beverage attends annually. “Some of the food and drinks even made it on the menu,” says Williams, helping staffers feel that their opinions and creativity matter. Boston Market has held similar Olympic-style competitions, bringing together the best carvers and servers from each region to face off—and show the operator some best practices these top employees already use.

These restaurant companies filed for bankruptcy during the pandemic