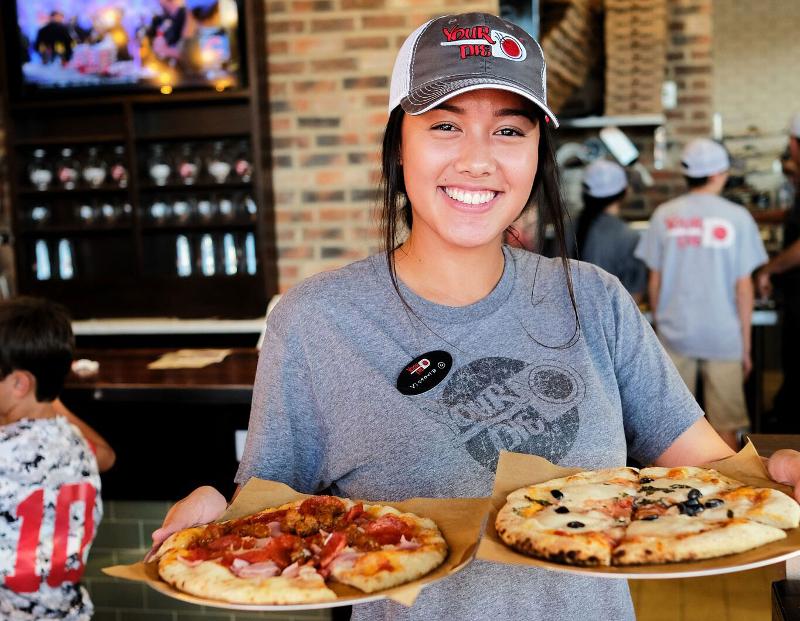 At Your Pie, the fast-casual pizza franchise, labor has been so short that some operators are slowing down expansion plans and working more on the front lines themselves, crafting pizzas because there aren’t enough people on staff.

To combat this, the system has raised wages. But the company has discussed other strategies to help its operators, such as tuition reimbursement or cell phone programs. “It’s a serious issue,” CEO Dave McDougall said. “When they don’t have enough staff and they can’t serve customers or can’t work full hours, that affects everybody.”

The worker shortage has led restaurants to dramatically increase their pay. But they’ve also taken benefits to new heights.

Every company surveyed for an August report from Black Box Intelligence said they did not have enough hourly workers. The “quit rate” and the job openings rate for hospitality workers, meanwhile, remains far higher than any other industry, according to the most recent federal data.

As such, restaurants have dramatically increased the benefits they’re offering their workers, now making the industry more likely to offer certain types of benefits than others.

For instance, 63% of restaurants in that Black Box survey offered wellness benefits to their workers, up 25% from pre-pandemic levels. By comparison, 45% of all employers, public and private, provide such benefits, according to federal data.

Eighty percent of companies offered hourly workers 401k plans, up 14% over 2019 and higher than the 65% of all employers that offered their workers such plans.

Many other benefits have seen their popularity soar at restaurants. For example, 54% of companies provide their hourly workers flexible scheduling, according to Black Box, up from 35% before the pandemic. Financial planning went from a benefit at just 17% of restaurants to 41% now. And family or elder care leave went from a rarity (2%) to somewhat common (29%).

By contrast, paid family leave was provided as a benefit for 23% of all employers, according to federal data.

Benefits companies that have emerged in recent years to provide different types of pay to workers have also found life in a post-pandemic environment.

DailyPay, the technology company that helps restaurants and other employers pay their workers after every shift, saw demand for its business surge during the pandemic. Companies first saw the daily payments as help for workers during quarantine and later as a way to attract and keep workers as a labor shortage intensified competition for employees.

“We’re growing at a significant clip,” Jeanniey Walden, DailyPay’s chief marketing officer, said in an interview. “Faster than we ever expected.”

Walden said DailyPay’s offering provides a significant incentive for employees to stay. She said workers stay up to 72% longer if they have access to their pay immediately. She said the program inspires employees to pick up extra shifts during the week because they see how much money they have and whether they need more of it. And Walden said many companies see better “time clock compliance” because employees better see the need to properly clock in and out.

“All the fast-food restaurants use it,” she said. “It’s the way people get paid now.”

Benefits are vital for companies to keep their workforce. A September survey from BTIG restaurant analyst Peter Saleh found that 53% of unemployed workers said good benefits would get them back to work. One of the biggest was flexibility, with 47% said that was important.

Many of the labor challenges in the restaurant industry began before the pandemic, which led many companies to start upping their benefits. Noodles & Co., for instance, began offering financial wellness and immediate pay in 2019. Today the company has parental benefits, including adoption assistance, maternity leave and paternity leave.

McDonald’s for years has had a tuition program called Archways to Opportunity that provides employees with the ability to learn English language skills, earn a high school diploma or get up to $3,000 in tuition assistance. As the labor shortage worsened this year it began testing emergency childcare as one potential benefit for workers.

Whether the efforts pay off remains to be seen. Yet in August, 6.8% of accommodation and foodservices workers quit their jobs, according to federal data.

And at the end of the day, benefits are just one part of the equation. “The owners that take good care of their employees, have a good culture, they’re not having as difficult a time as those that have not been as thoughtful with how they treat their employees,” McDougall said. “Good people aren’t going to work in an environment that’s not good.”