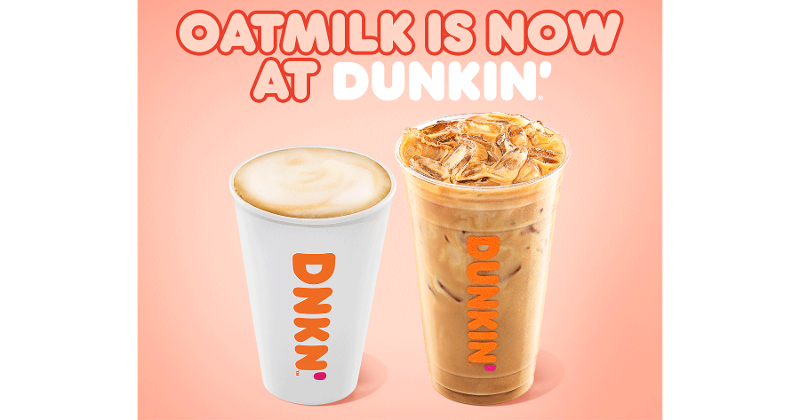 Last week, Dunkin’ added oat milk to its menu at all U.S. locations, giving customers the option of iced oat milk lattes and lightening their coffee with the dairy-free product. At most Starbucks, coffee drinkers can request coconut, soy and almond milk for their barrista-crafted drinks, and earlier this year, the chain launched an Oatmilk Honey Latte in the Midwest. Peet’s also is menuing the dairy substitute in its limited-time Oat Milk Horchata Latte and Original Cold Brew Oat Latte.

Plant-based meat alternatives have gotten most of the attention on chain menus, thanks to the marketing muscle of some of the big manufacturers. But nondairy milks have gradually been trickling in, with oat milk the latest and fastest growing product to flow into the mainstream.

According to Restaurant Business sister company Technomic, menu mentions of oat milk have increased 50% year over year in the U.S. In Canada, the trend has reached boom proportions. Oat mylk, as it’s spelled north of the border, has increased by 300% on menus. Canadian chain Second Cup Coffee Co. recently rolled out an Oatmilk Mocca Flash Cold Brew and Starbucks announced that it will launch oat mylk at company-owned locations in Canada this fall.

While almond milk is still the most popular worldwide and soy milk the longest-running dairy substitute on menus, baristas claim that these milks tend to curdle when heated, according to a coffee industry source. And both these options have a more pronounced flavor that can overpower coffee. Oat milk, on the other hand, has a creamy texture and more neutral taste.

Like almond milk, oat milk doesn’t come cheap, and operators may charge more for these options. Just this February, PETA led a campaign against Starbucks for its upcharge of 50 cents or more on drinks made with plant milks. And some Dunkin’ stores are tacking on a small additional charge for oat milk.

But the demand for plant-based alternatives continues to be strong worldwide. Technomic’s Global Foodservice Navigator Program reports that 41% of consumers across the globe are now eating more plant-based foods than they did a year ago. While American and Canadian diners are in the mix, the percentage is higher in other more surprising markets. United Arab Emirates leads the charge at 70%, with Indonesia (52%), Brazil (50%) and China (46%) rounding out the top countries.

Other plant milks, including peanut, cashew, walnut and rice are also on the market but not as widely used in foodservice. Coming up next: milk made from hemp, flax seed, sunflower seeds and peas.