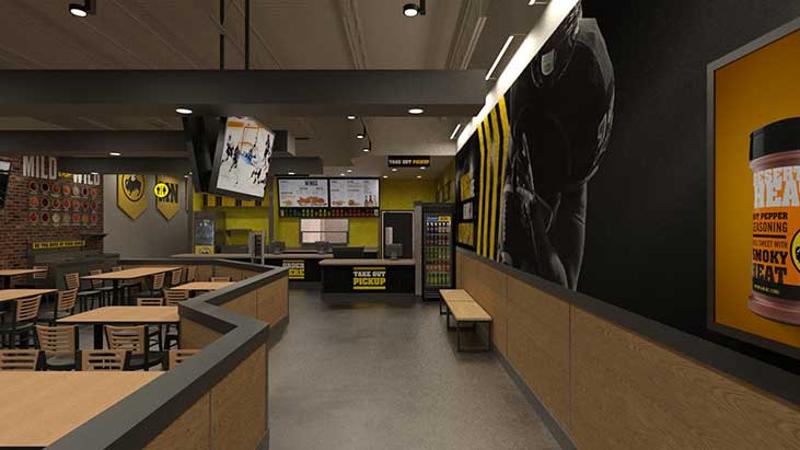 Buffalo Wild Wings has lifted the napkin off its delivery and takeout experiment, a 2,500-square-foot spinoff called B-Dubs Wings Express.

Dine-in space within the two prototype stores, both converted from PizzaRev fast-casual outlets in the Minneapolis area, will be limited to 35 seats. Consistent with the formula of a full-sized BWW, the stores will feature TVs airing sports, so patrons picking up an order can check on the progress of a game.

The menu will be scaled down to bone-in and boneless wings, chicken tenders, a chicken sandwich, mac and cheese, a burger and salad. The drink choices will include draft and bottled beer as well as wine and soft drinks.

BWW did not say how many of its 21 signature sauces will be offered, either for off- or on-premise customers.

Delivery will be provided by DoorDash, the franchisor said.

The stores are scheduled to open sometime this summer.

The test of a smaller footprint is a departure for BWW, whose stores opened in the last three years have averaged 6,100 square feet, with some stores are as large as 11,200 square feet. The conventional units feature 40 to 60 TVs.

The venture comes at a pivotal time for the brand, which has been under pressure from a shareholder owning 10% of the company to shift direction. Marcato Capital has criticized management for dabbling in other concepts such as PizzaRev, in which BWW held a minority stake and served as a franchisee, and R Taco, a Mexican fast-casual venture primarily owned by BWW. Both have been tested as possible new growth vehicles.

The conversion of the lone two PizzaRevs operated by BWW into B-Dubs signals a retreat from that concept, which has just been sold to the venture-capital company of former McDonald’s CEO Don Thompson.

At the beginning of the month, Marcato succeeded in winning three seats on the company’s board. At the time of their election, longtime CEO Sally Smith announced that she would retire as soon as a replacement could be found, but no later than Dec. 31.

A test of alternative building sizes and formats had been presented as one of Smith’s ideas. She, along with a number of other casual-chain leaders, have noted the loss of business from their segment to the fast-casual market and the boom in delivery. Several, including Red Robin and The Cheesecake Factory, have expressed interest in diversifying into those fields.

In addition, restaurant footprints have been shrinking as commercial rents have continued to climb.

BWW did not reveal the cost of the new stores or what level of sales are forecast.