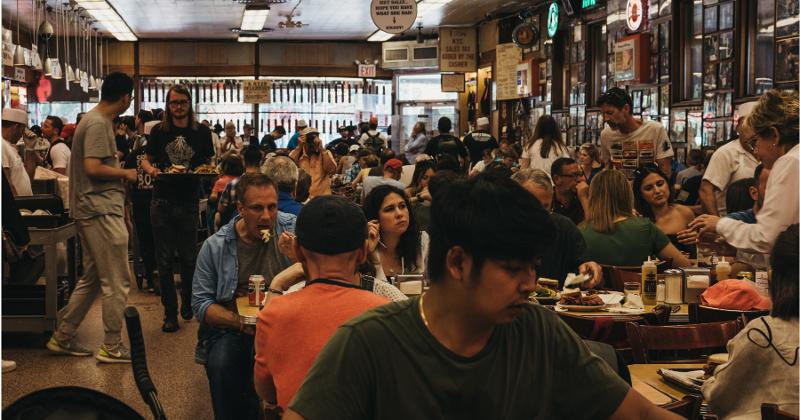 Customers returned to restaurants in force in the first quarter of 2022, making more reservations and seeking out indoor dining at higher rates than a year ago—particularly at places that offer a special experience.

That’s according to a new state of the industry report from Yelp, which also found that consumers are ordering less takeout this year, though off-premise remains much more prevalent than it was before the pandemic.

Searches for reservations on Yelp rose 107% year over year in Q1 2022 as people looked to get out and about again, even as COVID-19 case counts remained high well into February. They also sought out experiential concepts like conveyor-belt sushi (searches up 500% year over year) and supper clubs (up 200%).

In a sign of just how much the pandemic has warped dining behavior, searches for indoor dining were up an eye-popping 6,360% compared to the same period two years ago, when the option to eat inside was a given. Many more customers are also specifying a desire to sit outside, with searches for outdoor dining up more than 1,000% over the past two years.

Overall, 13 million diners were seated through Yelp in Q1, a 48% year-over-year increase.

Takeout’s durability has dovetailed with a rise in the number of ghost kitchens listed on Yelp. More than 3,000 restaurants have tagged themselves as a ghost kitchen, or a location that offers only delivery and pickup, since the company added that attribute last September.

13 million diners were seated through Yelp in Q1, a 48% year-over-year increase.

As customers return to restaurants, they are increasingly experiencing smaller staffs and longer waits, which are showing up more often in reviews. Mentions of long wait times increased 23% year over year, while comments about restaurants being short-staffed rose by more than 229%. As of last month, the industry was still short about 700,000 jobs compared to before the pandemic, according to the Bureau of Labor Statistics.

To deal with fewer workers, restaurants are continuing to limit their hours, menus and tables, Yelp found. They’re also using more technology like Yelp’s Guest Manager to automate certain front-of-house tasks like check-in and waitlisting to free up hosts.

Customers are also noticing higher menu prices, with mentions of that phenomenon up 25% year over year. Menu price inflation has been rising steadily for months as operators combat higher costs for food and labor, reaching an average of 7.4% year over year in May.

But Yelp found that more expensive food doesn’t appear to be having an impact on consumers’ behavior, and noted that many are actually using the site to search for higher-priced restaurants. The company speculated that people are resigned to paying more when they dine out and want to spend their money on higher-quality experiences.

The data is another sign of restaurants’ recovery from the pandemic, but paints a picture of an operating environment that is still far from normal. A Restaurant Business analysis found that while sales at publicly traded chains have largely rebounded, much of the growth has come from price increases.