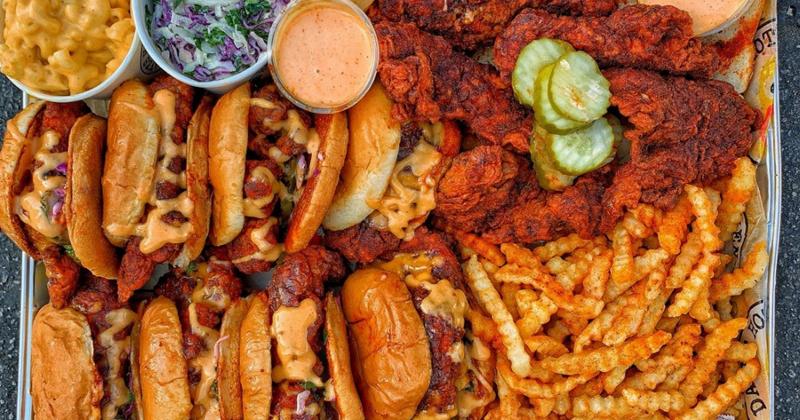 In fact, it remained red hot throughout 2021, according to the latest Top 500 chain restaurant data released by Technomic.

Case in point: No other restaurant concept grew its sales and units as swiftly last year as did Dave’s Hot Chicken. The hot chicken chain, which ranked No. 348 on Technomic’s annual list, is growing so fast, that it’s hard to keep up.

Dave’s sales climbed 262.1% and its total units increased 471.4% over 2020 numbers, according to Technomic, a Restaurant Business sister company. The chain had 40 units at the time the Top 500 list was compiled, and its website now shows 55 open restaurants. In 2020, Dave’s Hot Chicken had just seven locations.

Dave's may be growing the fastest, but chicken concepts of all kinds have been flourishing of late. Fast-casual chicken chains have increased their sales by an average of 24.03% over 2019—more so than any other segment tracked by the Top 500.

“Chicken chains were a big source of Top 500 sales growth once again in 2021, with chains of all sizes getting into the action,” said Kevin Schimpf, Technomic’s director of industry research and insights. “We saw key players like Raising Cane’s and Wingstop post impressive results, as well as mid-sized chains like Slim Chickens and upstarts like Dave’s Hot Chicken.”

Other standout performances among fast-casual chicken chains on the Top 500 included:

The fast-casual segment as a whole had a very good year in 2021—even as it continues to add drive-thrus, digital operators, alcohol, table service and other things that blur its service style with other categories. Fast casual’s sales grew 14.4% since 2019 and generated $6.7 billion in annual sales last year.

Hot chicken chains, in particular, had a moment in 2021.

“The key thing is it’s a very simple menu,” Bill Phelps, CEO of Dave’s Hot Chicken, told RB last year. “We look at lots of concepts where their menus get expanded and they don’t do anything really well. The vision here is very simple: To have the business based on one simple core product and we manage that and we do that really well.”

Dave’s Hot Chicken got its start in 2017, as a parking lot pop-up n Los Angeles, before opening its first brick-and-mortar restaurant in East Hollywood.

Two years later, the chain’s founders brought on industry veteran Phelps, co-founder of Blaze Pizza and former CEO of Wetzel’s Pretzels, to helm the concept as it began franchising.

In September 2021, the company said it had already sold the rights to more than 500 franchise locations in the U.S. and Canada.

Dave’s Hot Chicken saw sales of $79.5 million and average unit volumes of $3.38 million in 2021, according to Technomic.

“We couldn’t believe how we could sell franchises during the pandemic,” Phelps told RB in February 2021. “It shocked us … People are signing on to be franchisees without even seeing a restaurant.”