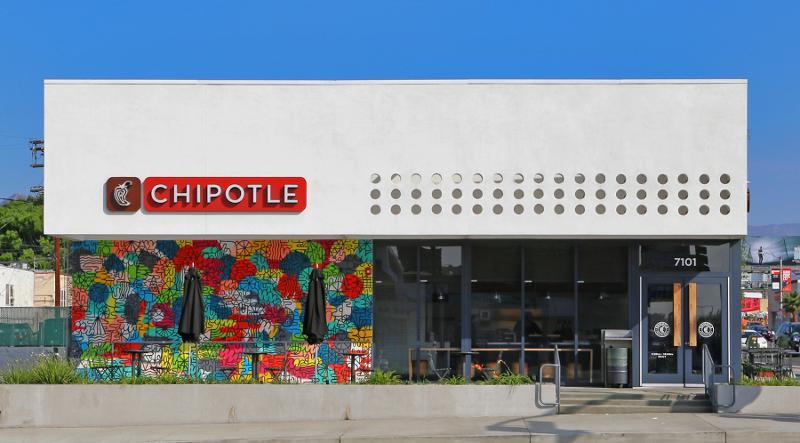 Digital sales, however, jumped 216.3% and now account for 60.7% of total sales—a quarterly record for the brand.

Same-store sales improved throughout the quarter, climbing from negative 24.4% in April to positive 2% in June, the company said. So far in July, same-store sales are up 6.4%.

Chipotle opened 37 new units during the quarter and closed three restaurants. About 30 locations remain temporarily closed because of the coronavirus, largely inside shuttered shopping malls, the company said. Of those new units, 21 locations have order-ahead and pick-up Chipotlanes. Three restaurants were relocated to add drive-thru lanes and three others were remodeled to include them.

The chain recently announced plans to open its 100th Chipotlane, significant because the drive-thrus have proven to contribute to higher check averages than traditional units.

Chipotle is testing a variety of store formats, including Chipotlane-only stores, CEO Brian Niccol told analysts during a conference call.

"We're going to test various formats because our goal is to have a suite of assets that we can then put into a trade area to maximize Chipotle sales out of that trade area," Niccol said, according to Sentieo. "So, the good news is we're seeing these access points all to be truly viable. And I feel like we've got terrific flexibility in what we want to build."

For the quarter, order ahead surged up 140%, with delivery climbing 125%, executives said.

"Everything moved to off-premise," at the start of the pandemic, he said. "We had a huge shift to delivery which, over time, they learned about other access modes of order ahead and pickup."

Chipotle, which has previously said it plans to capitalize on real estate made available by recently shuttered restaurants, reported that it had $934.6 million in cash and no debt as of the end of June. The chain also has access to a $600 million untapped credit facility.