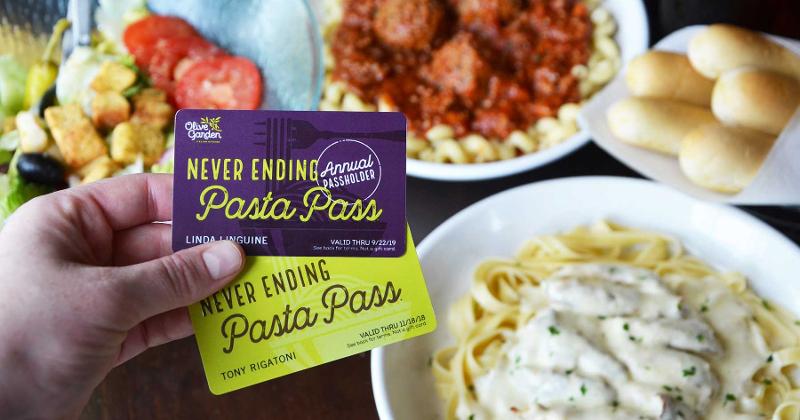 Olive Garden’s Never-Ending Pasta Bowl might have an ending after all.

Incoming Darden Restaurants CEO Rick Cardenas on Friday said that the chain may not bring back the popular bottomless pasta promotion, which had been an annual offering for more than two decades and spawned additional promos like the frenzy-inducing Never-Ending Pasta Pass.

But the 879-unit Italian chain hasn't offered the traditional second-quarter traffic booster for two years—and its most recent quarterly results suggest it might be better off without it.

Same-store sales at the chain for the three months ended Nov. 28 were up 5% compared to two years ago, despite the fact that it was lapping nine weeks of the Never-Ending Pasta Bowl and still dealing with the restraints of the pandemic and ensuing labor crisis.

The most recent version of the offer promised unlimited servings of pasta, sauce and toppings, as well as unlimited soup or salad and breadsticks, for $10.99.

“As we look forward, we don't know if we'll bring and when we'll bring Never-Ending Pasta Bowl back because we have a never-ending abundance every day with our never-ending first course.” —Darden President Rick Cardenas

“We're really proud of the fact that we comped over two years ago without Never-Ending Pasta Bowl running,” Cardenas told investors during an earnings call Friday. He tied the success to better productivity and the ongoing strength of takeout, which accounted for 28% of sales in the quarter.

“We know [Never-Ending Pasta Bowl] was a negative impact over the years, but the profitability wasn't as high as the guests that we're doing today,” he said. “And so we decided to reduce the dependency on Never-Ending Pasta Bowl this year because we didn't need to drive volume into our restaurants.”

“As we look forward, we don't know if we'll bring and when we'll bring Never-Ending Pasta Bowl back because we have a never-ending abundance every day with our never-ending first course,” Cardenas said, referencing the brand’s unlimited breadsticks.

The shift says a lot about the state of Olive Garden and its parent, Darden, as they emerge from the pandemic. In recent quarters, the company has invested less in promotions and marketing and focused more on productivity and operations. Its restaurants are now staffed at 95% of their pre-COVID levels, and executives said they don’t necessarily need to get back to 100% because of the operational streamlining.

“Because of the productivity enhancements that we've made over the years in these brands, it means we don't need as many people as before,” Cardenas said.

Those enhancements involve using technology to make things easier for managers “so they don’t have to hunt and peck” and can spend more time training workers. CEO Gene Lee specifically cited machine learning software that has helped restaurants forecast better.

“If you can predict your business correctly, then you can really increase your productivity at the store level,” he said.

The company is also accelerating a plan to raise wages. Starting Jan. 1, it will increase its minimum hourly pay to $12, including tips, which will result in average earnings of about $20 an hour. It had originally planned to make that change in 2023.

Lee indicated that most of Darden’s workers are already at the $12 benchmark.

“This is what I would call an entry-level wage, and more rural America,” he said. “It will probably have more impact on Cheddar's than any of our other brands.”

“That really isn't costing us very much in the grand scheme of things,” Lee said of the pay hike. “It's a very small portion of the wage inflation that we're seeing in the back half of the year.”

Overall for the quarter, same-store sales across Darden’s eight brands were up 10.5% compared to two years ago. LongHorn Steakhouse and its fine-dining concepts continued to shine, each posting two-year comps of more than 22%. Meanwhile, the brands grouped under its “other business” category saw same-store sales rise more than 6%.

Total sales were $2.27 billion, and the company opened a net 34 new restaurants in the quarter.

Also on Friday, Darden announced that Gene Lee would retire as CEO after seven years on the job.