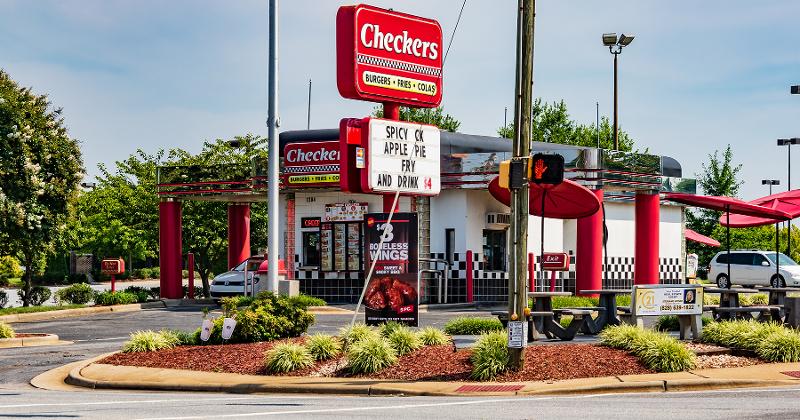 It’s fair to say that an environment in which consumers don’t really want to eat inside a restaurant is good to a chain like Checkers, which along with Rally’s has nearly 900 locations, most of which are little more than a drive thru.

And indeed, the chain’s same-store sales last quarter rose nearly 9% last quarter, easily outpacing a fast-food sector that has largely weathered the coronavirus, which has helped improve the company’s profits.

So why then has Checkers hired advisors on a restructuring?

“Because I have a really aggressive growth agenda that requires a capital injection that is not possible under the current debt structure,” CEO Frances Allen said in an interview. She noted that the company brought in restructuring advisor Miller Buckfire, “so we can restructure that debt so we can enable and unleash that growth.”

Allen is an industry veteran, having been the president of Jack in the Box before taking over as CEO of Boston Market in 2018. She was named to the top job at Checkers and Rally’s in February, taking over for longtime CEO Rick Silva—she was the last in a series of new executives brought in to turn things around.

Checkers had been slumping for years. Average unit volumes for its flagship chain averaged a 1.2% decline the past five years, according to data from Restaurant Business sister company Technomic, and total system sales underperformed other fast-food rivals.

But its biggest problem was the debt load. Before the pandemic, Fitch Ratings listed Checkers among restaurant companies in danger of filing Chapter 11. Consistently weak sales put pressure on the company’s liquidity, according to Moody’s, which downgraded the company’s credit rating last September, citing its high debt-to-EBITDA ratio, or earnings before interest, taxes, depreciation and amortization.

Improving sales cures a lot of ills, however, and last month the company was able to present surprisingly strong same-store sales. “Our sales results are putting us in a great position,” Allen said. “Our profit is up significantly ahead of the quarter last year.”

Allen said the company largely put in motion a strategy set when she arrived, noting that the company’s finance, marketing and information chiefs are all new. “We’ve got a lot of new energy and new talent,” she said. “They put together a solid rejuvenation plan and we’re executing against that.”

Still, the company added third-party delivery and pushed both value and premium items, including a Mother Cruncher chicken sandwich, and it simplified its menu. And the company pushed bundled offers to target customers feeding families.

The company’s same-store sales growth came despite the loss of much of its late-night traffic—with bars largely empty and events postponed, late-night business at many chains have suffered.

Checkers recently held a Jack in the Box reunion of sorts when private equity owner Oak Hill Capital brought in former CEO Lenny Comma to be on its board of directors.

Jack in the Box, it must be noted, generated improving sales in recent quarters under Comma’s leadership, and he was behind the plan that helped the company generate 6.6% same-store sales growth last quarter—his last before his retirement.

“He’s an exceptional leader,” Allen said. “He came up through operations, but he has great marketing savvy and gut, and oversaw a period of tremendous growth at Jack in the Box. He and I had a terrific working relationship. He is a trusted advisor for me and Oak Hill.”

The question now is where Checkers goes from here. Allen believes the economy will favor quick-service brands like hers’. “Undoubtedly we’re going into a recession,” she said. The chain typically performs better during such downturns.

But Allen clearly wants to expand, and the company is talking with some operators that want to build locations. But the chain also has to restructure that debt.

Allen believes it will be done out of court, thanks in part to that sales growth, and says it has the support of lenders. “It’s like refinancing your house,” she said. “We’re trying to get to a place where our balance sheet supports more capital injection.”