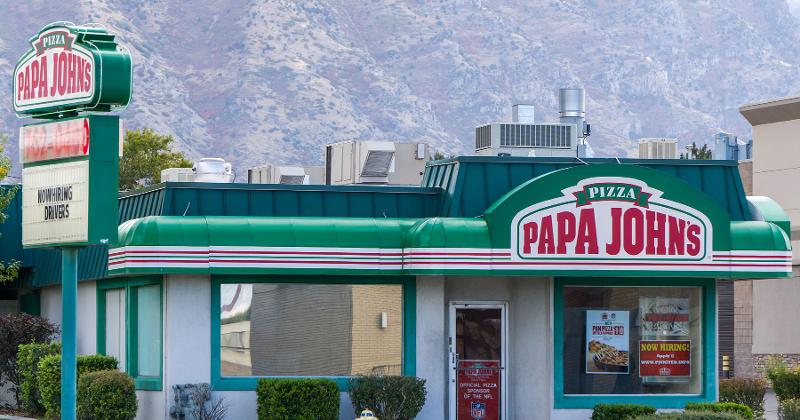 Papa John’s decision to embrace third-party delivery has a relatively simple explanation: The company is struggling to find drivers.

The Louisville, Ky.-based pizza chain has doubled down—or maybe tripled down—its work with third-party delivery by inking its third agreement with a delivery provider, Uber Eats. The company now has deals with three of the four major providers, including DoorDash and Postmates.

The decision to go with third-party delivery carries some risks for the chain. Papa John’s, after all, already has its own delivery network, which allows it to control the customer relationship and get all the data related to the transaction.

But Rob Lynch, named CEO of Papa John’s two months ago, considers the deals to be a relatively simple way for his company to address the driver shortage, while giving the company access to new potential customers.

“I believe the work that we’re doing to establish relationships with the aggregators is probably the lowest-hanging fruit,” he said on the company’s third quarter earnings call Wednesday.

“We think that they can help us, both through customer acquisition, as well as productivity and throughput during our highest peak periods, as they offer more drivers to be able to take our orders,” he said.

Restaurant chains of all sorts have been facing down an intense labor shortage of late. With unemployment at 3.6%, the pool of people available to fill the industry’s numerous job needs is not extensive.

But delivery drivers are in particularly hot demand, thanks in part to the growth in delivery and ride-hailing companies. DoorDash and Uber Eats are competing for drivers with Papa John’s and Domino’s.

Papa John’s has had an additional problem in its own reputation. The chain’s same-store sales plunged last year after founder John Schnatter admitted to using a racial slur. The chain’s diminished reputation from that incident may well be putting it at a disadvantage in its competition for drivers.

Lynch, for his part, said the company’s trouble attracting drivers is more indicative of a broader problem, rather than one specific to Papa John’s.

“I would say it’s much more a broader macro issue,” he said. “But I also think as we continue to improve revenues and grow transactions, which is absolutely our focus, we will be able to give more incentives to drivers, and our drivers will be able to make more.

“I think our business improvement will help us attract and retain drivers.”

Lynch said the company is integrating the delivery providers into its point-of-sale system, so the process is more seamless.

He also said that data sharing isn’t a big issue. “The reality is that 85% of our customers have an aggregator app on their phone already,” Lynch said. “The idea is that the only way the aggregators are going to get our customers’ data is through seeing what our customers are ordering. Frankly, that doesn’t ring true for us. They are already getting that data.”

Many restaurant chains have been inking deals with delivery providers, seeking access to their customers.

Aggregators such as Uber Eats and DoorDash have their own sets of customers—though such customers are getting more “promiscuous,” Grubhub has said. By jumping onto the aggregators’ apps, Papa John’s believes it can get more customers.

So far, third-party delivery been a relatively small percentage of overall sales. And Lynch said that the company’s work with third-party players didn’t drive the chain’s 1% same-store sales growth in the third quarter.

Lynch said profitability on orders from aggregators isn’t a problem. “I wouldn’t say it’s exactly the same” as an in-house delivery order, he said. “But I would say that we’re very happy with the profitability associated with the aggregator orders.”