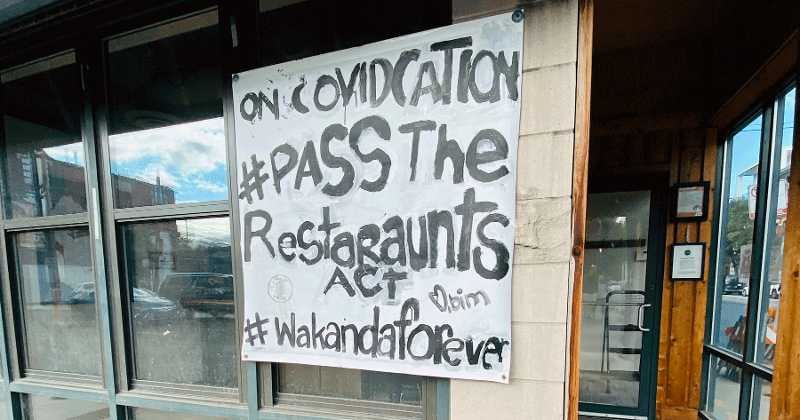 Disregarding the warnings that up to half the restaurant industry won’t survive without additional aid, President Trump announced today that the White House is suspending negotiations with Congressional Democrats on another relief package until after the Nov. 3 election.

Instead, Trump tweeted, he has directed Senate Majority Leader Mitch McConnell to focus on a quick confirmation of the president’s Supreme Court nominee, Amy Coney Barrett.

“Our economy is doing very well,” the president wrote. “The Stock Market (sic) is at record levels, Jobs and unemployment also coming back in record numbers.”

Report after report has warned that the restaurant industry would be mortally wounded if more federal aid is not forthcoming. The National Restaurant Association said that 3% of the nation’s restaurants have already closed, with 100,000 more likely to shut for good within the next six months if they don’t get a lifeline.

“The twists and turns of these negotiations make for great theater here in Washington, but every week of further inaction means that hundreds of additional restaurants will shut their doors in communities nationwide," Sean Kennedy, EVP of public affairs for the National Restaurant Association, said in a statement. "If the White House and Congress are going to stop work on a comprehensive plan, it will be a failure if they cannot at least reach agreement on the basics that will allow restaurants to survive the winter – a second round of PPP and expansion of the Employee Retention Tax Credit.”

"If Congress goes home without passing a relief program for restaurants, their neighborhood restaurants will go out of business,” the Independent Restaurant Coalition (IRC), a group formed early in the pandemic to preserve local restaurants, said in response to Trump’s announcement. “We cannot afford five or six more weeks of decreased revenue, more debt, and uncertainty about colder weather.”

Industry lobbyists have warned of a cascading effect if the nation’s second largest private-sector employer should suffer wholesale closings. The IRC pegs the damage as a 2.3% drop in nationwide employment, with 11 million people put out of work. “Congress should get this done," it declared.

Restaurateurs were quick to sound off on Trump's move.  "Can’t fathom that there will be no #stimulus until after the election," tweeted Danny Meyer, founder and CEO of New York City's Union Square Hospitality Group. "On behalf of millions of restaurant employees - still without work - and hundreds of thousands of independent restaurants striving to provide jobs and return vitality to their communities, please reconsider!"

Trump attributed the suspension of negotiations on a new aid package to the unwillingness of House of Representatives Speaker Nancy Pelosi to negotiate in good faith. He accused the California Democrat of packing proposals with expensive programs that have nothing to do with the fight against coronavirus.

A $2.2 trillion aid bill, known as the HEROES Act, was passed by the Democratic-controlled House last week. Included in the measure was the IRC’s plan to channel $120 billion directly to restaurants.

The act has found no traction in the Republican-controlled Senate, where leadership had shown support for a much narrower relief measure, derisively tagged “the skinny bill” because it allocated only $1.6 trillion in relief and stimulus funds.

With both aids measures stalled, negotiations were undertaken in fits and starts by Pelosi and Secretary of the Treasury Steven Mnuchin. Trump’s directive effectively ends those communications.

“I have instructed my representatives to stop negotiating until after the election when, immediately after I win, we will pass a major Stimulus Bill that focuses on hardworking Americans and Small Business,” the president tweeted.