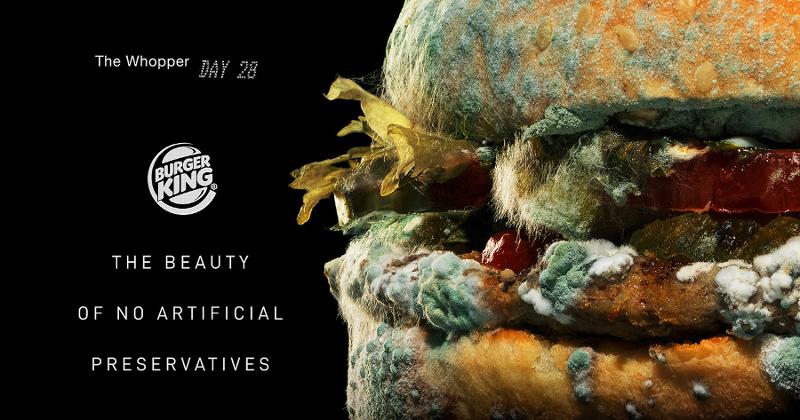 The chain’s “Moldy Whopper” ad features a 28-day-old Whopper coated with mold. It’s a major departure from typical food photography, in which menu items are carefully crafted to look as appetizing as possible, even if they wouldn’t actually taste good if you ate them.

The idea, for practical purposes, was to call attention to the company’s shift away from artificial preservatives.

It did that. In spades. Twitter mentions for “Whopper” and “moldy Whopper” spiked for a couple of days after the ad appeared, according to financial services site Sentieo.

At the same time, however, such an ad is a big, big risk. Burger King is showing a picture of its primary product in a horrific state. Though the picture itself is well-done, the sandwich is far from appetizing. And that runs contrary to the general idea behind food advertising, which is to make sure customers actually want to consume what it is you’re selling.

To get an idea of what consumers think about the ad, we put the question to our Twitter followers.

Turns me off for sure. 🤢

Like others, I thought this had to a parody of BK's terrible & highly stupid advertising sensibilities. I am almost in disbelief that this is real! It's like they're trying to lose customers. I love the Whopper but from now on, I'll be thinking of this moldy one & puking quietly.

Not the image you want a consumer to have in their head at the time they make a purchase decision...much less when (now if) they take the first bite.

A few understood what Burger King was trying to accomplish—highlight the lack of preservatives—and they still didn’t like it.

I respect them for losing the preservatives but I think this campaign is nuts. I feel like this image is going to taint my future desire for Whoppers (which are the only things at BK that I like these days)

Edgy, so kudos for the risk but does not entice me in the immediate. Will hopefully go a long way in the media coverage on the news they are actually sharing.

At the same time, however, a lot of folks felt it was a success. Burger King got some mileage out of an otherwise boring photo ad.

Advertisements are about getting attention. This one definitely succeeded: We are talking about it, after all, and isn’t that what it’s all about?

it's good
(1) we are talking about it
(2) QSR food has the perception problem that it is not real food due to the additives, this hits it on the head

Love it. There goal was to deliver one specific message, and this accomplishes it

Maybe the ad will help Burger King accomplish that. Maybe it won’t. Guess we’ll have to wait.

not worth the 28-day wait