Burger King is bringing back another old menu item: tacos.

The Miami-based burger chain Monday introduced $1 Crispy Tacos nationwide, resurrecting a menu item not seen since in years. The tacos are returning as a limited-time offer following a successful test at Burger King locations along the West Coast. 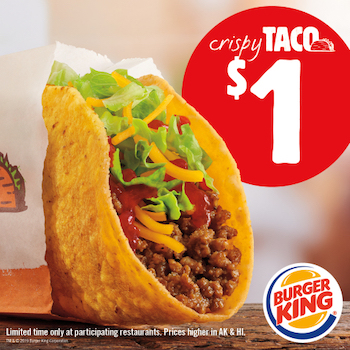 “We’ve seen success with tacos in our West Coast restaurants and knew it was time to bring this West Coast crowd-pleaser nationwide,” said Chris Finazzo, president of Burger King North America, in a statement.

Burger King has had some recent success resurrecting old menu items that customers have demanded. Chicken Fries, in particular, turned out to be popular after the chain brought them back in 2015 following a menu hiatus. Facebook groups had been calling on Burger King to bring the item back.

The same has been true of tacos: A Facebook group called “Bring Back the Crispy Tacos” has nearly 700 members. And news of the recent reemergence of Crispy Tacos on Burger King menus has spread on social media and message boards.

The new taco pits Burger King more aggressively with smaller rival Jack in the Box, where low-price tacos have long been a popular add-on item.