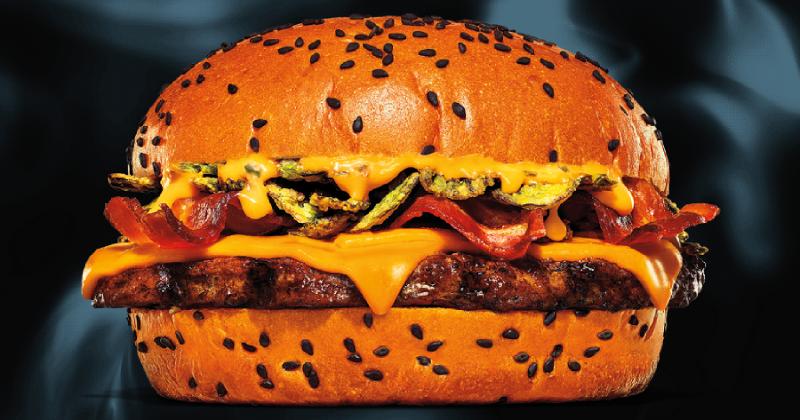 The launch of the Halloween-themed Ghost Pepper Whopper comes along with enticements for BK Royal Perks Members./Photo courtesy of Burger King

This Whopper hits fans with some serious heat—the flame-grilled beef patty is topped with spicy queso, crispy jalapenos, bacon and ghost pepper cheese, layered on a toasted orange and black sesame seed bun. The ghost pepper was the first to measure over 1 million Scovilles, the scale used to test heat levels. Although it is no longer the hottest pepper in the world, it's way up there.

The LTO is an obvious tie-in to the Halloween season, but Burger King is enticing fans of the holiday with even more themed promotions. The chain is adding an electromagnetic field ghost detector within the BK app, giving Royal Perks Members a chance to track down paranormal activity in their homes.

Members who use the Home of the Ghosts feature in the app can also score a meal for two featuring the Ghost Pepper Whopper, available from Oct. 17-31.

Last month, Miami-based Burger King announced its “Reclaim the Flame” plan, showcasing a renewed focus on its signature Whopper. The plan includes investing in premium branding to reaffirm the status of its flame-grilled Whopper and developing new flavor extensions, like the new ghost pepper LTO.

The plan was developed in collaboration with franchisees and includes Burger King investing $400 million over the next two years, with $150 million of that going to marketing, advertising and digital. The remaining $250 million is targeted for a “Royal Reset”—upgrading restaurant technology and kitchen equipment and remodeling units.