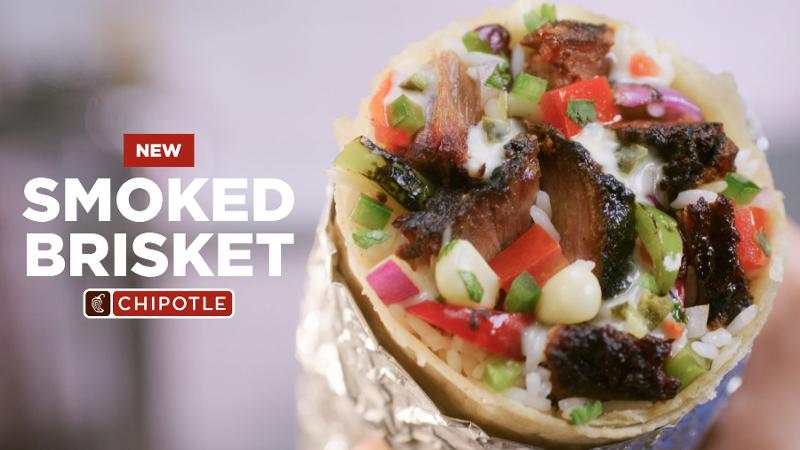 Chipotle Mexican Grill is adding smoked brisket to its menu for a limited time, the fast casual announced Tuesday.

The nationwide rollout comes after Chipotle began testing the protein at 64 locations in Cincinnati and Sacramento, Calif., last November.

Chipotle’s smoked brisket is charred on the grill and seasoned with roasted jalapenos and chipotle chili peppers. It is chopped by hand and finished with a new brisket sauce made with smoky chili peppers, the chain said.

Smoked Brisket can be added to any of Chipotle’s bowls, burritos, quesadillas or tacos.

"This isn't your standard brisket experience," CMO Chris Brandt said in a statement. "We've created a differentiated Smoked Brisket recipe that is authentic to our menu and pairs flawlessly with our real ingredients."

Smoked brisket is among the most requested menu items by Chipotle customers, the chain said. The fast casual’s culinary department has worked on the new protein for two years to develop a “reimagined brisket recipe that is uniquely Chipotle,” the chain said in a statement.

Brisket is the third national rollout of a new menu item at Chipotle so far this year. In January, the chain launched Cilantro-Lime Cauliflower Rice for a limited time. And in March, it added the Hand-Crafted Quesadilla, the chain’s first new customizable entrée in 17 years.

Chipotle follows strict sourcing guidelines, which can make adding a new menu item—especially a protein—challenging. The chain has said that just 5% of U.S. beef meets its guidelines. The chain’s brisket is “responsibly sourced” and meets Chipotle’s Food with Integrity standards, Brandt said previously.

More than 10 million people tried carne asada during its test run, with about half of those customers being first-time Chipotle diners, the chain said.