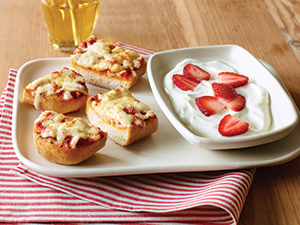 Like its grownup menu, kids’ meals here focus on scratch cooking and all-natural ingredients, yet the options for young diners are familiar: spaghetti and meatballs, chicken fingers, grilled cheese and the top-selling Mason’s Breakfast for Dinner. For a side of veggies instead of fries, the customer need only ask.

In fact, for anything at Summer House, it’s just a matter of asking. A big sign in the entryway says “YES,” a nod to the tailor-made service that extends to kids as well as adults. “A child can order anything she wants,” says Milner. “We have a three-year-old who comes in regularly, and lately she’s been on a quesadilla kick, so we make one especially for her. Essentially, kids get to create their own menu items.”

Restaurants that provide what families want—speedy service, something kids will eat, healthy options to please parents and a willingness to customize—are gaining business as economic doldrums linger. Parties with kids have essentially been flat over the past few years, says Warren Solochek, vice president at Port Washington, N.Y.-based researcher, NPD Group, with many families opting for value meals and divvying up   entrees among several kids. “When families have to make the tough financial decisions, restaurants lose,” he says.

Atlanta-based Uncle Maddio’s Pizza Joint is  hoping it is positioned to win. Families can order a big pizza to share or a six-inch, create-your-own personal pie as a $2.99 kids’ meal. “We’re developing kids’ preference for our DIY model early,” says Jennifer Rotondo, senior vice president of marketing for the 30-unit fast casual.

Uncle Maddio’s has millennials locked in, Rotondo says. “Now our job is to train their kids to be fans by introducing items that will grow with them as their tastes develop.”

Since introducing a two-tier format to its kids’ menu last year at all  2,000 locations, Applebee’s has seen a bump in traffic in return, says Executive Chef Jessica James. Both incremental sales and sales of kids’ menu items are up, she says.

Applebee’s menu offers kids flexibility and the same kind of choice grownups make in their dining experience. The “Really Hungry” and “Really, Really Hungry” sections acknowledge that young diners have a range of appetites, tastes and even moods, with pricing reflecting the amount of food.

While the menu revamp added 10 new meal options, the chain had to bring in only one new SKU—vanilla yogurt. “That’s a really important consideration when you have a system that’s 99 percent franchised,” says James. “It had to be easy for them [franchisees] operationally.”