If you’re balking at the wholesale price of 12-ounce center-cut steaks and extra-thick loin chops—and your customers are too—it’s time to rethink the protein portion of your menu. Meat is going to remain high through 2013, according to top economic indicators. “Wholesale prices are the same or up to 5 percent higher for beef and pork than last year,” says Bill Hahn, economist with the Economic Research Service of the U.S. Department of Agriculture. 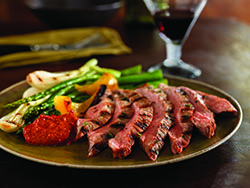 To meet margins and please guests, chefs and purchasers have to be more clever about filling the center of the plate. Some are stretching smaller portions of meat with vegetables and grains, others are creating killer meatballs and sausages, and still others are exploring underutilized cuts that offer better value.

“Cuts heavily used by restaurants—like steaks and spareribs—will show more extreme price swings than those that are in less demand,” claims Hahn. Good reason why the chefs here are playing around with some less popular parts of the animal—be it pig, cow or lamb.

Justin Brunson loves whole pigs. He can pretty much put every part to use as chef-partner of Old Major restaurant and owner of Masterpiece Deli and Denver Bacon Company in Denver, Colorado. His new Nose to Tail Plate ($27) at Old Major is a case in point.

“I put as much of the animal on one plate without overdoing the portions,” notes Brunson. The plate holds a crispy pig ear salad dressed with a warm jowl (a.k.a guanciale) vinaigrette, braised rolled pork belly, housemade smoked ham and a thin cut pork chop with rhubarb au jus. “I get two whole animals in each week from a family farm in Brush, Colorado, and break them down in Old Major’s open kitchen,” says Brunson. “The first time, I did it out of necessity, but the butchering really caught on with my customers, so now it is billed as an event.”

Not only is in-house butchering a good marketing tactic, it saves Brunson money. “I buy whole animals for under $2 a pound. I’m actually paying the farmer more money than he would get from a slaughterhouse, but less than I would pay a meat supplier, so it’s a better deal for both of us,” he explains.

At the upscale Enchantment Resort in Sedona, Arizona, executive chef David Schmidt doesn’t put much on the menu that’s “too far out of the box.” “Guests expect familiar cuts of steak, like filet mignon,” he reports. But last year, he brought in the bavette—a newer, underutilized cut from the sirloin—and created a crowd-pleaser. “I compare the bavette to a tenderloin. It has 90 percent yield and I’m able to plate a 6½-ounce portion.”

Schmidt marinates the beef for 24 hours in a mix of soy sauce, olive oil, red wine, thyme and garlic to tenderize and flavor it, then cooks it on a hot grill or plancha to rare/medium-rare doneness. Once it rests a bit, he slices the steak across the grain to prevent any chewiness and plates it with cilantro pesto, charred hen-of-the-woods mushrooms, wrinkled fingerling potatoes and miner’s lettuce ($34).

The chef admits that educating customers was key to winning them over to this unfamiliar cut. “We trained the staff to convey the bavette steak as a cool, edgy menu item,” says Schmidt. The Enchantment’s clientele also puts a lot of trust in the kitchen, which has empowered Schmidt to try some more adventurous meat cuts. He’s now playing around with veal cheeks, goat and lamb tongue.

Lamb gets its day

“When you look beyond the mainstream cuts, you get a better deal,” says Aaron Wright, executive chef at Lark Creek Tavern in Larkspur, California. Although he offers lamb chops at his 150-seat restaurant, they are T-bone chops composed of the sirloin and tenderloin—a less popular but recognizable cut. They are marinated and grilled with asparagus and spring onions. The dish is priced at $25—less than a rack.

Wright takes lamb neck—“similar to oxtail,” he says—and braises it until the meat falls apart. “The perfect size pieces of meat” and braising liquid are then tossed with pappardelle for a hearty pasta entrée ($19.95). In winter, celery root, parsnips and butternut squash are added to the braise; for spring, Wright is incorporating asparagus tips and fresh mint. On the appetizer side of the menu are Moroccan Lamb Meatballs ($10.95), made with ground lamb shoulder flavored with cumin, coriander, cinnamon, cloves and other North African spices. “We’re selling a lot of lamb, even though it’s not typically a top five protein in restaurants,” Wright notes.

Wright is also on a “portion control kick,” trying to wean customers away from plate-covering meat entrees. “Six ounces of protein is the new standard for an entrée portion, and four ounces is plenty when you stretch it with pasta,” he believes. “You can offer a good price point by delivering smaller meat portions balanced by other ingredients. It’s more in the design of the dish.”

At The National in Athens, Georgia, executive chef Peter Dale menus a Certified Angus Beef hanger steak as his “house steak.” “While I love a great dry-aged rib eye, at The National, we focus on flavorful cuts that represent a good value,” he points out. “We get amazing feedback from customers on its flavor and texture, and it’s consistently a bestseller.”

Hanger is a versatile cut, Dale adds, so he likes to change its preparation with the seasons. In early spring, the grilled steak was paired with a Vidalia onion soubise and a Spanish-inspired relish of piquillo peppers, almonds and smoked paprika. A favorite summer dish is Panzanella—bread salad with heirloom tomatoes, grilled hanger steak and salsa verde.

“Hanger is also the perfect cut to prepare sous vide,” Dale explains. “The steaks are cooked to rare ahead of time in the immersion circulator, and they come out really tender and evenly done. When a customer places an order, the kitchen then grills or pan-roasts the steak to the desired temperature. The result is a beautiful crusty outside with a delicious, melt-in-your-mouth center.”

Dale has also treated guests to beef cheeks, which admittedly, some diners were a little apprehensive about at first. But once they tasted the slowly braised cheeks served over creamy South Georgia grits, topped with a tangy roasted tomato gremolata, they were sold. “The result is akin to the best pot roast you’ve ever eaten,” he says. Dale is adding fava beans and green garlic to the dish in step with the current season.