McDonald’s is changing some of its burgers again.

The Chicago-based fast-food giant on Wednesday said that it has removed artificial flavors, colors and preservatives from its “classic” burger lineup in the U.S., which includes the hamburger, cheeseburger, McDouble, Double Cheeseburger, Quarter Pounder and Big Mac.

Kempczinski said that the company spent more than a year working with suppliers to remove artificial ingredients from its burgers. Two-thirds of the company’s burger and sandwich lineup now contains no artificial preservatives, the company said.

Kempczinski said the all-natural burgers began showing up in the company’s 14,000 domestic restaurants in August and are now “fully embedded” in all locations.

“We have a great group of suppliers,” Kempczinski said. “We got a ton of support from them to make the changes.” 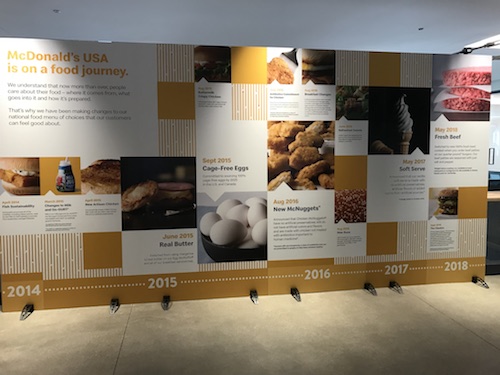 For McDonald’s, such moves have become important elements in the chain’s bid to win over customers that have abandoned the chain for competitors in recent years.

McDonald’s has also committed to sustainably sourcing its coffee by 2020, using nothing but cage-free eggs by 2025 and sourcing beef from suppliers participating in sustainability programs.

And earlier this year, the company began serving its quarter-pound burgers made to order using fresh beef.

Such moves have helped improve the company’s image among consumers, Kempczinski said, which has lifted same-store sales in recent years. “We do believe it’s improving customers’ perception of McDonald’s,” he said, citing a “number of sources” that suggest customer satisfaction and appeal are “moving in the right direction.

“As we’ve shared in the past, improving the food is one part of what we’re doing to build a better McDonald’s,” Kempczinski added, noting that remodeling of the chain’s restaurants and improving customer experience are part of those efforts.

Such moves are increasingly important to the chain at a time when the restaurant business is as competitive as it’s ever been. The company’s primary competitors, notably Burger King and Wendy’s, continue to perform well. But there remains a growing number of fast-casual better burger chains, such as Shake Shack and Five Guys, that are driving consumer demands for better food.

“All you have to do is look around at what is happening in packaged food and what’s happening in other restaurants,” Kempczinski said. “Customers have an elevated expectation around food quality and ingredients. Customers are becoming more demanding around what’s in their food.”

Kempczinski said that this won’t be the last time the company removes artificial ingredients from its menu. He said the company is going to “monitor and see what the customer reaction is” before making a decision on other items.

“The reason why we use the word ‘journey’ to describe this is that these things don’t happen in one fell swoop,” he said.