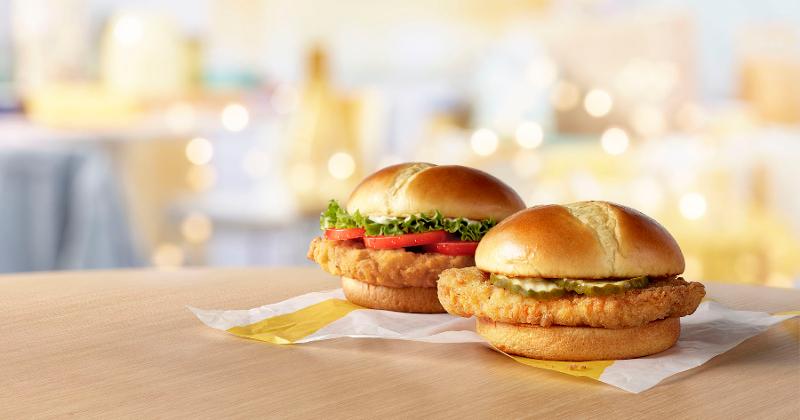 McDonald’s is making another run at a better chicken sandwich.

The Crispy Chicken Sandwich is a fried chicken fillet served on a potato roll topped with butter and crinkle-cut pickles. The Deluxe is topped with tomatoes, lettuce and mayo.

The sandwich test began in the two markets today and will continue through Jan. 26, the company said in a statement.

“We certainly meant no beef when we hinted at a new menu item arriving in some of our restaurants,” a company spokesperson said in an emailed statement.

The company’s Twitter account strongly hinted at the test Sunday afternoon and featured a photo of an insulated bag along with a chicken emoji.

McDonald’s has been under mounting pressure in recent years to fight back harder against Chick-fil-A, the rapidly growing Atlanta-based chain that specializes in chicken sandwiches. McDonald's franchisees in the South, many of whom have done battle against Chick-fil-A for years, led a push to get the company to upgrade its own sandwich.

That pressure intensified in August, when Popeyes Louisiana Kitchen, owned by Restaurant Brands International, generated incredible success with its own sandwich. Same-store sales rose 10.5% in the chain’s third quarter, and the product’s reintroduction last month generated long lines and strong traffic for weeks.

Company executives have suggested that the efforts by Popeyes were having an impact on its own chicken sales.

“I think it’s fair to assume with everything going on in the quarter with chicken that we did go a little bit the opposite way on chicken,” CFO Kevin Ozan said in October, according to a transcript on financial services site Sentieo.

McDonald’s has long been a huge seller of boneless chicken products, particularly its popular Chicken McNuggets.

Southern-based restaurant chains specializing in boneless chicken have thrived in recent years. Chick-fil-A has more than doubled in size over the past five years, and both Zaxby’s and Raising Cane’s have grown, too. The three chains’ system sales grew 14.5% on average in 2018, according to data from Restaurant Business sister company Technomic.

McDonald’s in recent years has worked to bolster its own offerings to combat these chains. Sources said it had been working on an upgraded chicken sandwich long before Popeyes hinted at its own product.

In late 2017, for instance, its launch of Buttermilk Crispy Tenders proved so popular that the chain ran out of the product at many locations.

Its relaunch six weeks later didn’t generate the same level of interest, however.

McDonald’s has had other chicken tests. Just more than a year ago, for instance, it tested made-to-order chicken sandwiches and chicken tenders in the Seattle area.