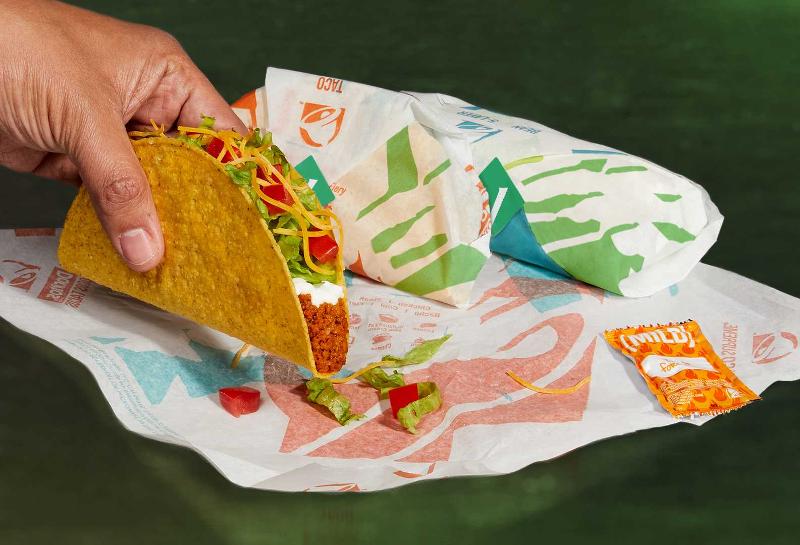 Taco Bell is testing a new, plant-based taco. No, it is not made with Beyond Meat.

The Irvine, Calif.-based chain on Wednesday said it is testing a new plant-based taco, called the Cravetarian Taco, at a single location in Tustin, Calif., starting on April 29 “while supplies last.”

It is not made with Beyond Meat, despite a deal between the maker of plant-based meat and Taco Bell parent company Yum Brands. A spokeswoman for Taco Bell said that the chain is still working with Beyond on a new protein that could be used in the chain’s menu items.

This one is made with Taco Bell’s own blend of peas and chickpeas and is similar to a Taco Supreme. The taco will feature the blend, cheddar cheese, lettuce, tomatoes and sour cream in a crunchy shell.

Taco Bell says the Cravetarian is certified vegetarian by the American Vegetarian Association, so long as it is served as-is. It has 180 calories.

The taco will be priced at $2.19. Customers can also use the plant-protein as a meat substitute for other items such as chalupas or burritos.

The move comes as Taco Bell is working to burnish its vegetarian credentials, following the reintroduction of its potatoes.

Taco Bell said in January that it is working with Beyond Meat and in February Beyond said it has a deal to work with Yum’s concepts for the next several years.

The chain’s move comes as a growing number of fast-food concepts are pushing plant-based proteins in a bid to capture consumers that want to eat less meat but don’t want to stop eating restaurant food.