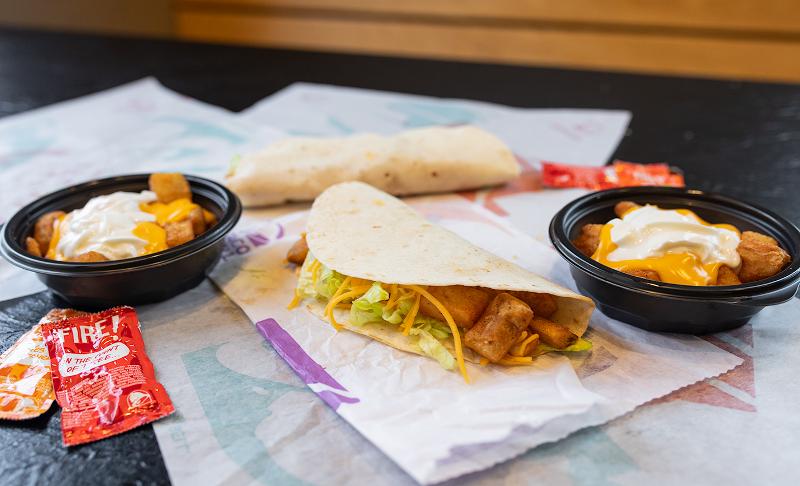 The Mexican fast-food chain on Thursday announced that it will bring back potatoes on March 11, including its Cheesy Fiesta Potatoes and the Spicy Potato Soft Taco, which had been a casualty of the chain’s menu simplification effort last year.

At the same time, the Irvine, Calif.-based chain also said that it is working with the plant-based meat company Beyond Meat to create “an innovative plant-based protein that will be tested in the next year.”

Details of what that protein will be and in what it would be used were not provided, but it represents a shift for a chain that had thus far avoided jumping on the meat-alternative bandwagon.

The return of potatoes will bring a more immediate result for vegetarians—which have long been fans of the chain. Taco Bell has more than 30 vegetarian ingredients on its menu and has worked with the American Vegetarian Association since 2015.

“The return of our beloved potatoes is just the first step in showing our fans the strong continued commitment to vegetarians we are making this year,” Liz Matthews, Taco Bell’s global chief food innovation officer, said in a statement.

Taco Bell removed the potato-based options from its menu in August as part of a broad effort to simplify its menu. The company said the decision to remove the items would make space for additional innovation while also simplifying operations to speed service. Drive-thru service in particular has proven vital during the pandemic. Smaller menus help improve speed.

The decision to remove the potatoes in particular upset vegetarians. There’s even a Change.org petition to “Save Taco Bell Potatoes.”

The company has a number of vegetarian-friendly options on its menu, such as the Black Bean Chalupa. The potato-based items, along with a potential Beyond Meat platform, promise to give the company an even larger menu of such items.

“We have long been a leader in the vegetarian space,” Matthews said. “But this year, we have more meatless options in store that vegetarians, veggie-curious and even meat-eaters will love.”

Taco Bell has generally avoided plant-based items, even as sister chains Pizza Hut and KFC publicly tested plant-based meat while chains such as Del Taco have eagerly jumped into the market. The company told Bloomberg nearly a year ago that it was talking with Impossible Foods and Beyond Meat on a potential partnership. The chain has apparently made its choice.