This week, Burger King brought back its Crispy Tacos nationwide after an apparently successful test at its West Coast restaurants.

The reintroduction of the long-lost product generated the media impressions you’d expect from a Burger King limited-time offer—that is, quite a bit. The Miami-based chain is really good at that.

We were curious about their quality, however, and on Tuesday, ventured to a nearby location only to be told they would be unavailable until 3 p.m., when we were too busy for $1 tacos.

Undeterred, we tried again at lunchtime Wednesday, but this time tried something different. We compared the tacos alongside versions from two fast-food taco chains, Taco Bell and Taco John’s.

That’s not necessarily a fair comparison. Burger King’s tacos are far more comparable to the ones from West Coast burger chain Jack in the Box, where the tacos are somewhat infamous but are frequently seen as add-on items to larger orders.

Unfortunately, we do not have a Jack in the Box nearby. (“When are you going to move closer to one of our markets?” a Jack spokesman asked us.) The two existing Mexican chains would give us a good comparison for Burger King's venture.

We assembled a distinct panel of male, Gen Z taco lovers to help us rate them. (Full disclosure: The panelists also happen to be the author’s two sons.)

The tacos are pictured below. The taco on the left is from Burger King. The one in the middle is Taco Bell, and on the right is Taco John’s. You can decide on appearance. 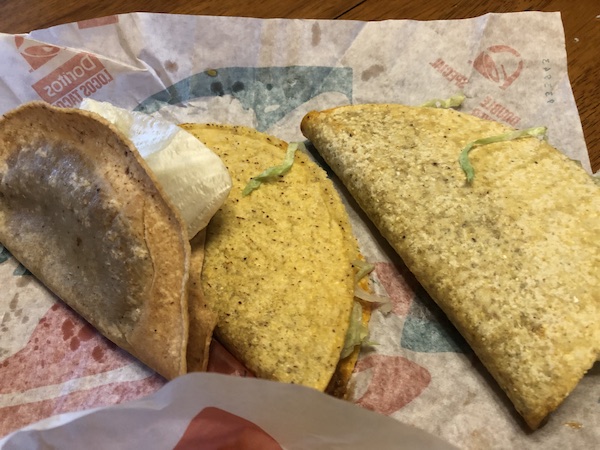 We went through the drive-thru in each case and received prompt service, getting our orders less than two minutes from the time we pulled up to the speaker.

From a price standpoint, Burger King wins hands down.

The $1 price point was lower than either Taco Bell or Taco John’s. Three of them cost us $3.22 after tax.

Three Crunchy Tacos at Taco Bell cost us $4.16 after tax.

At Taco John’s, the tacos cost us $5.77. We were able to add a drink to our Burger King order and pay roughly the same price.

Unfortunately for Burger King, that’s apparently where its advantages end, at least according to our panelists.

Neither ate more than two bites of the Burger King taco. Both had harsh words for the item.

The younger one said the Burger King taco looked like it had been “through the trash compactor from ‘Star Wars.’”

The eldest said simply that the Burger King version was “not good food.”

Both of them preferred Taco Bell’s offering, and they had mixed reviews on Taco John’s, for what it’s worth.

In fairness to Burger King, this is hardly scientific. And this particular panel has been skeptical of its products in the past. Neither thought much of the chain’s Mac n’ Cheetos, for instance, though the youngest has an affinity for Burger King’s Frozen Coke.

It’s also not necessarily fair to compare Burger King’s tacos to those of the Mexican chains. Burger King is a burger concept, after all.

And at a $1 price point, Burger King’s tacos are still selling, despite mixed public reviews. The drive-thru server said the restaurant has been selling “a lot of them” so far.

The tacos are a snack item or an add-on, designed to generate some curiosity early and perhaps a boost in average check later on, though the risk for the brand is consumers will trade down from other products to buy the tacos.

If our panelists are any judge, however, that’s not likely.