Restaurant renovations are on a lot of minds at the NRA show this year. John Longstreet, CEO of Quaker Steak and Lube, is touting his chain’s reduced footprint and the major impact it’s had on franchisee growth. 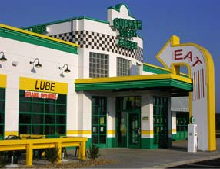 Quaker Steak has cut a million dollars out of its build out costs, going from $4.2 million to $3.2 million. Longstreet attributes roughly 40 to 50 planned franchisee units to the reduced costs. The chain got its size down through a number of strategies:

The 43-unit chain has 10 new units planned for this year and 15 for next year. They have new franchisee contracts totally 52 units, which should come online over the next seven years.

Check out the June issue of Restaurant Business for our cover story on innovative strategies for shrinking your footprint.