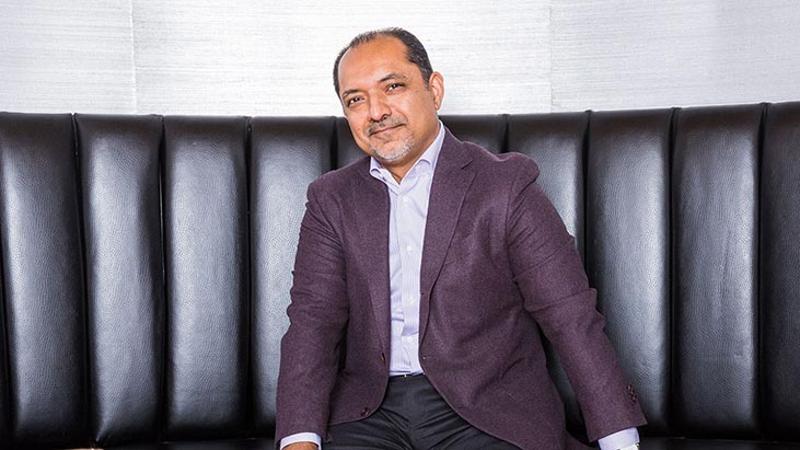 As much as Aziz Hashim loves franchising—and it’s fair to say he’s swept away—the one-time electrical engineer has never warmed to the risk factor, starting with the lone KFC he opened in his 20s with his parents’ life savings.

The unit prospered, opening in Atlanta just as the 1996 Olympic Games were beginning a few blocks away. Other KFCs would follow, but the danger of relying on one brand pulled at him.  So he diversified into other quick-service concepts within the area.

But even a strong market can falter, and all of Hashim’s restaurants were exposed to the economic conditions of one geographic area. So the multiunit, multiconcept operator became a multistate franchisee, expanding to some 90 units across a multitude of regions.

And now, after divesting all but 15 restaurants (encompassing two brands, Popeyes and Rally’s), Hashim is taking his most ambitious hedge against risk. Since watching franchisors fare significantly better than their franchisees during the Great Recession, Hashim wondered how he could foster a similar security. His idea was to share the risk of brand ownership with several franchisees, in exchange for a disproportionate chance at financial success, too.

He formed an investment fund that franchisees can buy into for as low as  $500,000 a share. In addition to the usual financial returns, partners also get first shot at franchise territories for brands that are acquired by the fund, NRD Capital. They are guaranteed a chance to grow with the acquisition, and the acquired brand gets proven operators to roll it out.

“It behooves you to be on both sides of the franchise business,” says Hashim, now 49 years old. “In some ways, they’re paying royalties to themselves.” But in all other respects, the partners are no different from other franchisees, except they have an equity stake in the franchisor upon which their restaurants depend.

In its 18 months, NRD has acquired two operations. The first was Frisch’s Big Boy. NRD took over the older regional brand for $175 million to provide the seeds for other acquisitions’ infrastructures, which the fund intends to keep separate.

The second was Fuzzy’s Taco Shop, a next-wave fast-casual Mexican concept. Since being acquired, it has grown from 74 stores to 104 through NRD’s franchisees-as-partners setup. “After it was acquired, one of the things they didn’t do is beef up franchise sales—they didn’t have to,” says Hashim. “We have a really good pipeline of franchisees in place.”

More concepts are being scouted, a process that’s not without its grimace-and-run moments for franchisees turned brand shoppers. “The biggest difference of our fund is a maniacal focus on brands that will be good for the franchisee,” he explains. “The ultimate test is, ‘Would I sign a franchise deal with this brand?’”

“That is the most difficult part of our work,” Hashim continues. A concept may be a sales phenomenon, but the model may not leave enough profitability for franchisees. And it’s hard to fool the fund on that point. “The people I have engaged at the first level all have an operational bent,” Hashim says. “We’ve been there.”

He contends that having a partnership of operators rather than financiers helps in coaxing entrepreneurs to consider a sale. “That makes the operators and founders of a company very comfortable,” says Hashim.

The fund echoes an earlier stab by the London-raised entrepreneur at managing his risks. After his portfolio of franchised restaurants had grown beyond an extent he could personally oversee, Hashim decided to safeguard the business by giving managers a stake. “If you want the ultimate ownership mentality among your people—and every entrepreneur does—then make them owners,” he says. “Now I’m dealing with partners, not employees. When you share the wealth, you end up making more than you gave away.”

He similarly cites big returns from the time he’s given to protecting the franchising model. Hashim is serving as this year’s chairman of the International Franchise Association, and he’s made the hallmark of his tenure an ambitious effort to make the world aware of franchising’s economic and social importance. The IFA has conducted research that shows many chain-restaurant employees don’t know a small local company, not a huge franchisor, is paying their wages. Communities don’t realize that a neighbor in a fast-food uniform may be managing a million-dollar business.

Of particular concern, he says, is organized labor’s attempt to unionize the restaurant industry by reclassifying franchisors as joint employers of franchisees’ staffs. Labor proponents have openly said the business will be easier to organize if they’re dealing with corporate rather than thousands of franchises.

“There’s only one issue that keeps me up at night, and that’s joint employer,” he says. “Overtime pay, a $15 minimum wage—all of those things, we can find a way to deal with. Joint employer is an existential threat. If you unionize restaurant workers, the franchising model will come to a standstill.”

And that’s not something he’s willing to risk. After his family moved from the U.K., Hashim studied to become an engineer and landed a position right after graduation. He quit within days, remembering how much he preferred clearing tables in his uncle’s Burger King restaurant at age 14.

“The cubicle life wasn’t for me,” he says. “Franchising for me was a very apparent route for success—a way to do something else,” he says.

It wasn’t lost on his family, which mortgaged its home for $150,000 to fund Hashim’s first KFC. Now his mother runs 13 franchised restaurants, and his sister has 30. “The trajectory of my family’s life has been affected by franchising,” he says. “I feel very, very strongly that this business model has to be protected and has to be preserved for the future.”