As CEO of Union Square Hospitality Group, arguably the most respected and successful group of fine-dining restaurants in the country, and now chairman of Shake Shack, the publicly owned string of high-volume burger spots, the 56-year-old Danny Meyer voices a business philosophy that would fit the teachings of a commune leader named Moonbeam. 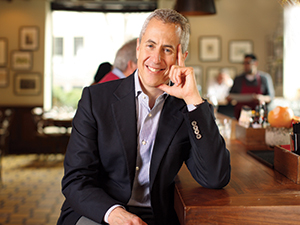 But there’s no long beard or sandals on Meyer. The arch capitalist is more likely to show up for a taping of Jim Cramer’s “Mad Money” or CBS’ “MoneyWatch” in a smart suit or business-casual slacks and sweater, his salt-and-pepper hair neatly trimmed. The possibility of a beret seems stronger when he explains how he changed the business starting at age 27, opening a serious restaurant with only a year of industry experience under his belt.

Meyer has admitted that he didn’t know what a cash-flow statement was when he fired up the stove at Union Square Cafe in 1985, inviting customers to brave its then-seedy New York City neighborhood. All he had was the conviction that food, service and decor weren’t the keys to success. They were just elements of the make-or-break distinction, the simple but hard-to-deliver real key to drawing a large, loyal clientele. “When you walked in our front door, I wanted the two hours we had with you to make you feel a little bit better,” Meyer told industry folk last June at the Aspen Food & Wine Classic. “It was all I knew … There was no strategy until I opened Gramercy Tavern.”

That was 10 years later. In the meantime, “we had a lot of people who came in happy, and we screwed it up,” he admitted.

Meyer realized that “people can sense authenticity.” Service that pleased needed to come from people committed to pleasing, not poseurs going through the motions for a good tip or to keep their jobs. Meyer’s focus shifted to employees as a means of delighting guests, and he developed the well-articulated philosophy he would coin “enlightened hospitality.”

The St. Louis native saw validation in the success of companies like Southwest Airlines, he recounted later to Cramer on “Mad Money.” Cramer grouped it and other service exemplars into a cadre of stock picks he christened the “Danny Meyer Index.”

“They are companies that want to make more money than any other company, but to do so not by putting the interest of their shareholders first, but by putting the interests first of the people who work there, then the people who do business there, then the communities in which they do business, and then their suppliers,” Meyer explained. “That virtuous cycle, what we call enlightened hospitality, creates a much more sustainable profit cycle.”

The employee-first philosophy is not unknown to other restaurant brands or leaders, but few have acted so boldly on it. For instance, in 2011 Meyer transferred his Eleven Madison Park restaurant to its chef and manager because they had a hankering to run their own place. Rather than lunge for the publicity, Meyer quietly revealed the change in ownership in the intro of Eleven Madison Park’s cookbook.

Meyer says the need to nurture employees’ ambitions is a key reason why USHG has expanded to nine concepts and more than 15 restaurants in multiple cities, excluding now-public Shake Shack. “Increasingly, I found [that] to get the best cooks, the best wine captains, the best maître d’, it was important to have for them a place to grow,” he said in Aspen.

Only when you have the best at each job do you get such deep benefits as securing better ingredients, selecting the best wines, trying harder to make the best meal and doing the best job at reading customers, Meyer says. Only then, he has stressed in his numerous public appearances, do you get the best business results.

His philosophy will get its true test as capitalistic principle in coming months, now that Shake Shack is public. Shareholders tend to talk in terms of what’s best for them, not for employees, suppliers or a restaurant’s neighborhood.

In securities documents filed before the blockbuster stock offering on Jan. 30, Meyer and team showed no signs of backing off their approach. Amid the usual language about AUVs, CAGR, COGS and EBITDA, they offered this assessment of the magic behind Shake Shack’s success (average sales of $5 million per store on an investment averaging $1.9 million.) “We believe that the culture of our team is the single most important factor in our success,” they wrote.

Would-be shareholders were introduced to Meyer’s corollary that the best employees—known inside his companies as “51 percenters”—come to the job with more heart than skill. They’re the ones who rely more on emotion than on flawless-but-disconnected execution to impress customers. And he provided a high-resolution depiction of those fitting the bill when he was asked on that Aspen panel to recall the low point in his 30-year career. Hands-down, he replied, it was 9/11, when Union Square Cafe became a haven for the weary who’d trekked the mile or so from Ground Zero.

“Seeing our staff automatically making sandwiches for everybody, seeing our staff going into a gear that no one told them to except their heart, to setting up a kitchen in the armory on Lexington, which is where the families went to see if there were survivors, where there weren’t any survivors …” he recalled in a quiet voice that trailed off.

So far, investors are buying Meyer’s employees-first approach. They bid up the value of Shake Shack, then a 63-unit operation with a net profit of $5.4 million for its last full fiscal year, to about $1.6 billion. Meyer’s personal holdings, a 21 percent stake, amounted to about $390 million.

But a people orientation can’t shield USHG or Shake Shack from dynamics beyond the staff’s control. At Union Square Cafe, the rent of “$8 a square foot turned into something like $300 a square foot,” Meyer recently told ABC News. He feels he has no choice but to close the eatery at the end of 2015 and find a new location.

Closings, Meyer has asserted, are the ultimate measure of how well a restaurant succeeded. “If every restaurant we opened can stand the test of time as an experience, then our guests would say, our staff would say, our community would say, ‘My life got better because that place existed.’ It [closing] would actually feel like a loss,” he said.

Danny Meyer's year at a glance

USHG’s NFL pop-up kicks off: The NFL taps Meyer’s USHG to launch and run Forty Ate, its Super Bowl-theme pop-up restaurant at the Renaissance New York Times Square Hotel for one week leading up to the big game.

Meyer wins on OpenTable buy: Priceline announces its $2.6 billion buyout of online reservations site OpenTable, of which Meyer is an original investor and board member.

Union Square Cafe to close: USHG declares that it will close and relocate the restaurant in 2015, due to skyrocketing rents in the space it has occupied for nearly 30 years.

Meyer invests in health: Meyer is part of a group with Daniel Boulud and others to invest $18.5 million to help fund the expansion dreams of healthy fast-casual chain Sweetgreen.