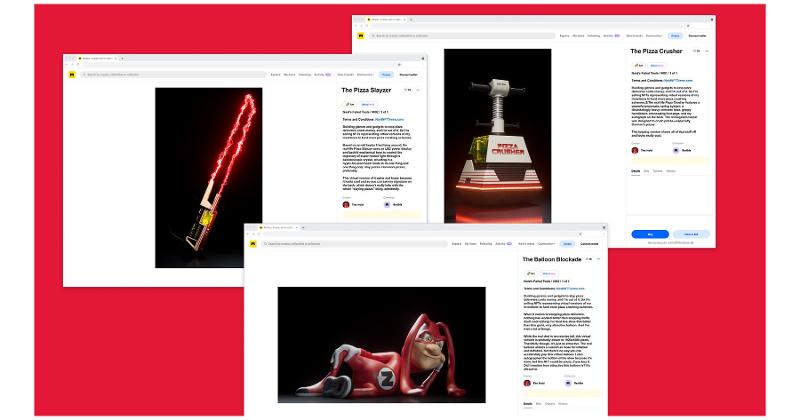 The Noid has come a long way since the '80s.

The nemesis of Domino's Pizza, who returned recently to thwart the chain's robot delivery test, is now selling some of its tools as nonfungible tokens, or NFTs, to raise money for future schemes.

An NFT is a one-of-a-kind digital asset that can be bought and sold online, usually with cryptocurrency, as a collector's item. The market for these digital works has exploded recently, with some selling for millions of dollars. Restaurants including Taco Bell and Pizza Hut Canada have waded into the NFT trade, and now Domino's is joining them—though it issued a tongue-in-cheek press release Tuesday warning customers not to buy the Noid's NFTs.

The three items up for auction on NFT marketplace Rarible are images of the Noid's Balloon Blockade, Pizza Slayzer and Pizza Crusher.

"We saw the Noid fans on Twitter asking how they could get a Pizza Crusher. We get it, it looks pretty fun," said Kate Trumbull, Domino's vice president of advertising, in a statement. "But who knows what pesky ideas the Noid will be able to fund with the proceeds from the NFT sale? It's just best that everyone steers clear."

The highest bidder would become the sole owner of the code that generates the NFT. Bidding for each of the images started at 0.02 of a cryptocurrency called wETH—the equivalent of about $47.90—and will run for 10 days.

As part of the broader Noid campaign, Domino's was also selling T-shirts and tumblers on Amazon, with proceeds going to Domino’s Partners Foundation, an independent internal nonprofit that provides financial assistance to the chain’s workers in need. As for proceeds from the Noid's NFTs, the chain said it has heard the villain may spend them on "new and improved gadgets, ingenious disguises, or maybe an autobiography."