It’s a good bet that Colonel Sanders never envisioned himself as a bearskin rug.

But it’s an equally good bet that Sanders would be OK with it. This is, after all, the same man who was so determined to sell chicken that for 30 years he was never seen without his trademark, long-out-of-style white suit because it stood out.

And if anybody knows Sanders’ salesmanship, it’s the folks at KFC headquarters in Louisville, Ky. Sanders’ presence can be felt throughout the two-building facility. There is the Sanders museum on the first floor of the “White House,” the white building now occupied by KFC parent company Yum Brands.

His image is everywhere, with statues and photos and even workers’ ID badges, the backs of which feature the phrase, “Make the Colonel proud.”

And executives bring him up routinely when they talk about the company’s marketing strategy. They believe his offbeat personality and drive to sell chicken give them permission to do things like the Colonel Sanders bearskin rug stunt or a hot tub that looks like a bucket of chicken.

“The brand has this unbelievable character that nobody really remembered, but he was a little crazy,” Kevin Hochman, president of KFC in the U.S., said on an episode of the Restaurant Business podcast “A Deeper Dive.” “He was really crazy about selling fried chicken. You’d ask him, ‘What’s the weather?’ ‘It’s fried chicken-eating weather!’

“The DNA of the brand was about real meals the hard way, and you had this character that would do anything, including dressing up like a crazy cartoon character, to sell fried chicken.”

It’s this marketing that has the chain on the verge of adding units again in the U.S. for the first time in 15 years. 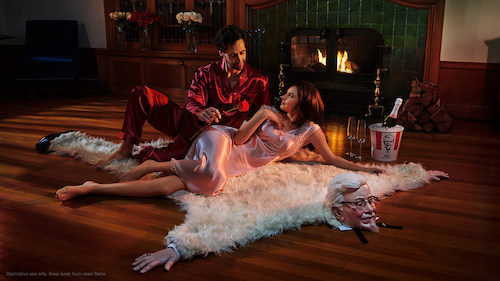 Among KFC's most creative stunts: a Colonel Sanders bearskin rug given as an award in a creativity contest. Such ideas can generate attention and keep the chain top of mind with its customers. Photograph courtesy of KFC

The U.S. has a lot of restaurants. All of them are vying for attention from a customer who has less of it.

“The customer is being bombarded with messages everywhere,” Hochman said. “They don’t have a big span of attention. The customer has a shorter attention span than a goldfish. We have to break through and create some news. Sometimes that requires us doing things that are a little bit bizarre, but the reality is we get tons of coverage on the stuff.”

KFC is hardly the only one. The fast-food business has been competing for customers’ attention using stunts and guerilla marketing tactics for years. McDonald’s Corp. last year gave away a selfie-taking device called a Frylus.

“I couldn’t be more proud of what the marketing team has been able to do,” said Hochman, who was marketing chief for KFC U.S. before he was elevated to the president’s role in 2017. “If you’re not interesting or you’re not creating some type of emotion in the customer, you’re just basically being forgotten.”

KFC worked with its advertising agency, Wieden+Kennedy, to discover what its brand DNA was five years ago as the company kicked off its turnaround effort.

That DNA, Hochman said, is fried chicken “done the hard way,” along with Sanders—who founded the chain when he was 65 years old and spent what should have been his retirement years traveling the country, selling chicken.

“Everything we do here kind of goes back to our founder, Colonel Sanders, who was this feisty, do-whatever-he-could-to-sell-fried-chicken” type of person, KFC U.S. CMO Andrea Zahumensky said in an interview. “When you unleash that kind of spirit on a really creative team, that’s when you get ideas like a Colonel Sanders bearskin rug or an 11 herbs and spices firelog.”

Indeed, “there is a method to everybody’s madness,” Hochman said. The company’s advertising and its marketing stunts all follow that DNA. “They’re all grounded in some kind of brand truth,” he said.

For instance, in 2017 KFC released a “GPS cassette,” putting Sanders’ voice on a cassette tape giving directions from KFC’s headquarters to Marietta, Ga., to celebrate the introduction of Georgia Gold chicken.

The idea was to not take shortcuts and do things the right way—but in a memorable, off-the-wall manner. After all, there’s no such thing as a GPS cassette, really. 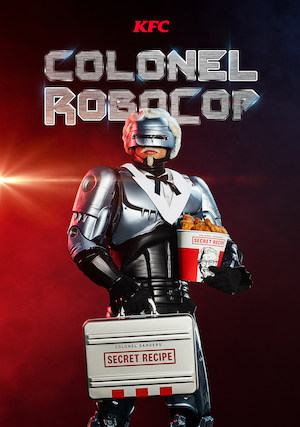 The first evidence that the company’s marketing strategy would work came in 2015 when KFC introduced “Saturday Night Live” alum Darrell Hammond in the role of Sanders. The chain’s same-store sales rose 4% that year.

It was a major risk. Hammond didn’t quite take well to the change—he publicly said he was “played” by KFC—and shifting a campaign that was working was not exactly a safe bet.

Yet KFC probably needed to take risks. In 2015 the company had shrunk by about 1,000 locations since 2004—and would lose another 400 stores through 2018. It had ceded its status as the country’s largest chicken chain to fast-growing Chick-fil-A. And rival bone-in chain Popeyes Louisiana Kitchen, led at the time by a KFC alum in Cheryl Bachelder, was rapidly growing, too.

“If you don’t take risks,” Hochman said, “how can you possibly become exceptional versus your peers?”

Hochman, who was CMO at the time, admitted that he was skeptical of the shifting colonel idea at first, but ultimately approved when Wieden+Kennedy showed him the new ads and explained their significance.

The rotating colonels ads have worked marvelously, helping the chain generate positive same-store sales for five straight years. Operators have noted that the ads got people talking about KFC again for the first time in a long time.

And the company keeps finding ways to make news with the ads, including its first female colonel, Reba McEntire, last year, and Colonel RoboCop, featuring the voice of original RoboCop Peter Weller, this year.

Hochman promises more colonels, including opportunities for “more diverse colonels” in the future.

“It’s a big part of why we had sustained success over time,” Hochman said.

It’s important to note that KFC has had something to sell all of these years. The company has focused more intently on product innovation, using regional flavors and ideas to generate new menu items.

They’ve developed a series of innovative food items often derived from local and regional flavors, such as the popular Nashville Hot Chicken, which debuted in 2016, as well as Pickle Fried Chicken and Chicken & Waffles last year—the latter of which was a “huge hit.”

There was the campaign to convince parents to name their babies Harland, for instance, and an offer to give customers free “bowl cuts” to celebrate the company’s Famous Bowls. KFC has sold items such as chicken and waffle onesies, and has a talking Colonel Sanders honey bear that says things like, “I’m Colonel Sanders, and I’m a bear! Nothing can stop me now!”

KFC is also “crowdfunding” its latest marketing ideas, which include options such as a hot tub that looks like one of the chain’s signature buckets of chicken.

The company keeps the stunts and campaigns coming to stay top of mind with its customers. “We are trying to create momentum with this brand,” Zahumensky said. “To really create a culture that customers want to be part of, you have to keep that momentum going.”

KFC's team includes Wieden+Kennedy along with its public relations firm, Edelman. Ideas are designed to get attention.

When the company was working on its Valentine’s Day promotion, this team presented some ideas to Zahumensky while sitting around a table inside her office. There were seven ideas, many of which were crazy. “Some of them are so crazy, you can’t even imagine,” she said. “Even if you think the bearskin rug is crazy, there are things crazier than that.”

But there were safer options, too. And then there was the bearskin rug, which would be offered as a prize in a creativity contest on Reddit.

“We were blown away by the bearskin rug,” Zahumensky said.

She brought that idea to a marketing committee of the company’s franchise advisory board. It’s a group that gets it, Zahumensky said. “They got really excited about it,” she said. “We have a marketing committee that gets what we’re trying to do with these brands. At the end of the day, we’re asking them to spend their hard-earned money to go create this bearskin rug.”

Not every idea KFC tries works to generate the desired attention. And the company has accepted the fact that some won’t work. But most of them do, and it’s important given how crowded the fast-food business is.

And while it might not seem so, a bearskin rug does indeed sell chicken.

“Our consideration has grown substantially,” Zahumensky said. “We are becoming a brand again that people want to be a part of.”

At the end of the day, that is what Colonel Sanders wanted: to sell more chicken. If that means his image is on a rug in front of a fireplace that smells like 11 herbs and spices, so be it.