Here’s something you never thought your fireplace needed: fast food.

On Thursday, KFC announced that it will sell logs for the fireplace that smell like the chain’s Original Recipe Fried Chicken.

And Burger King offered fireplace screens that look like one of its restaurants.

So once you buy one of KFC’s limited-edition fire logs for $18.99 at KFC.com/fire-log, go to Amazon and get one of the Burger King screens, to give your fireplace the look and smell of a row of quick-service restaurants.

“At KFC, we have always been proud of our role in bringing loved ones together at the dinner table around a bucket of our world-famous fried chicken,” Andrea Zahumensky, KFC’s U.S. CMO, said in a statement. “Now this winter we’re bringing all the things we love—family, friends and fried chicken—together around the fire with our scented firelog.”

Both Burger King and KFC have been using social media savvy marketing in recent years to generate attention and, therefore, sales at their respective concepts. Their efforts this week converged with the dual fireplace offers. 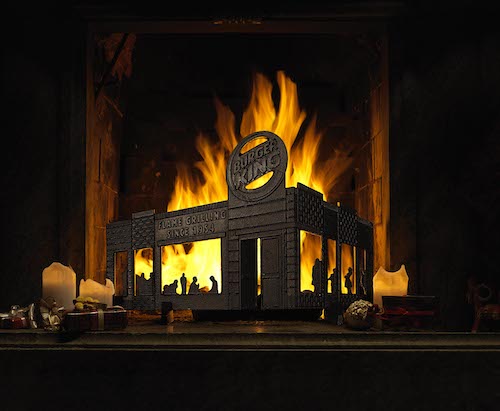 KFC has in the past offered products for sale—it once had an online shop with fried chicken clothing and pillows with images of Colonel Sanders. It has also used a parade of actors and comedians playing Colonel Sanders in ads, and once turned the colonel’s voice into a GPS navigation and even authored a romance novella featuring Sanders.

Burger King is also no stranger to such marketing—to introduce its new mobile app it offered Whoppers for 1 cent if they were ordered from a McDonald’s parking lot.

In this instance, the company is mocking Sweden’s Prince Carl Philip, who in 2010 said he designed a fire screen to look like the burning of the Swedish Royal Castle. It was later found that the prince was never part of the design process.

So Burger King Sweden has made a cast iron fire screen that looks like a Burger King restaurant. It’s available for $99.