KFC wants to bring Harland back.

The Louisville, Ky.-based chicken chain plans to award $11,000 toward the college education of the first baby born on Sept. 9 who is given the name Harland, after KFC’s founder, Colonel Harland Sanders.

KFC noted that, according to the Social Security Administration, the name Harland ranked No. 3,257 on the list of most common baby names last year.

The company wants to move Harland up that list as a way “to honor the world’s most famous chicken salesman, continue his namesake and inspire the next generation of entrepreneurs.”

The baby name contest comes as KFC has been using the likeness of its famous founder aggressively in its ads and marketing. The company is using a series of actors, comedians and musicians to play Sanders in television ads, and his likeness is common in the chain’s newly remodeled locations. 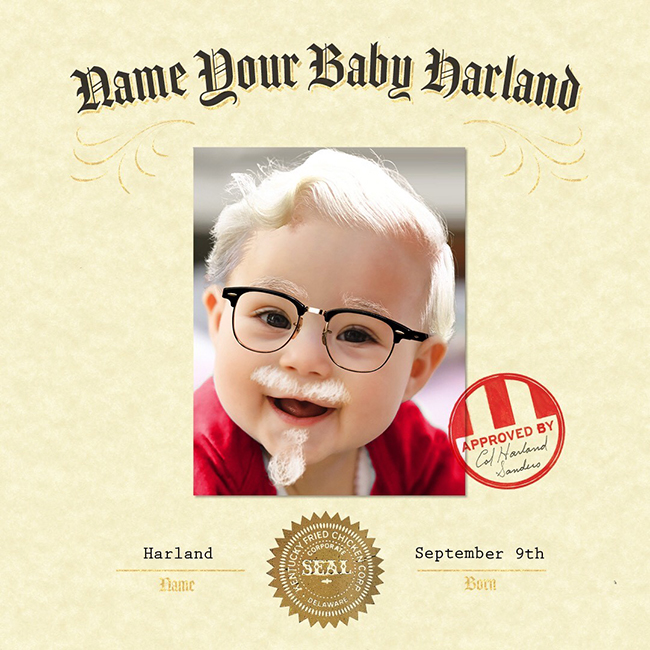 “Even though vintage names are making a comeback, our iconic founder’s name was dwindling in popularity, and we couldn’t just stand idly by and let that happen,” Andrea Zahumensky, chief marketing officer for KFC U.S., said in a statement.

Beginning Sept. 9, parents can submit the name, date and time of their baby Harland’s birth, along with their contact information, on www.kfc.com/babyharland. The site will be live for 30 days, “giving parents time to adjust to the newest addition to their family.”

The baby’s first name must be Harland, and each entry will be vetted to be sure that said baby is, in fact, named Harland.