Restaurant chains are giving more stuff to their customers than ever before so they can get their data.

Several different restaurant chains, including giants McDonald’s and Burger King, are currently testing loyalty programs in the U.S., and a number of others—including the aforementioned chains’ rival, Wendy’s—recently debuted their programs.

The goal of such programs is simple: to capture more information about those customers to find more ways to convince them to come back. In doing, they seek to capture some of the success of chains like Starbucks and Domino’s, whose loyalty programs have been central parts of their business model.

In addition, the chains can offset some of the data they’re losing to third-party delivery providers that have grown by leaps and bounds over the past year.

With so many online orders, “I don’t have the guest feedback loop that I traditionally have had,” said Robert Byrne, director of consumer and industry insights at Restaurant Business sister company Technomic. “And on top of that, the proliferation of third-party ordering and apps, and now not only do I not have that sort of guest-facing moment, the touchpoint, I don’t even have the information anymore. I just have faceless, nameless order X that goes out the door via third-party delivery service Y.

“So the need to have that guest information becomes even more critical from that standpoint.”

According to the payment company Square, 42% of restaurants plan to invest in customer loyalty programs.

Domino’s Piece of the Pie loyalty program, which is connected with the company’s popular smartphone app and rewards customers with free pizzas after their sixth order, now has 27 million members.

The Ann Arbor, Mich.-based pizza chain has another 40 million customers who have been in that program at some point, and it has 80 million-plus customers in its database. “We spent a lot of time on initiatives, thinking about how we can continue to mine that treasure of customers, and find ways to better serve them at their time of need to drive higher frequency,” CEO Ritch Allison said last month.

Starbucks has shown exactly how important these loyalty customers can be. The number of members of its Starbucks Rewards program rose 15% last quarter to almost 22 million people. They accounted for half of all spending at the chain’s company-operated units in the last three months of the year.

Much of that growth came from its Stars for Everyone update that enabled people to collect points, or stars, no matter how they pay. That change has helped the company recover loyalty members it lost during the pandemic—when its sales plunged due to store closures—and surpass its pre-coronavirus highs.

“It’s a priority for our guests. They participate in multiple programs and they see value in them.” —Whitney Gretz, Burger King.

Unsurprisingly, a number of chains are getting on board, including the major fast-food players. Wendy’s introduced its Wendy’s Rewards loyalty program last year. The program has 3 million members, and the company recently hired Kevin Vasconi away from Domino’s to be its chief information officer. One of his primary tasks will be to build the burger chain’s data analytics team.

“As we build our data analytics team and the work that Kevin and the team are doing, I think we can continue to connect to not only the active users to drive frequency, but to really engage some of the folks that haven’t been super active,” Wendy’s CEO Todd Penegor said on the company’s recent fourth-quarter earnings call.

McDonald’s is in the midst of a massive effort to give its customers more digital options, which it calls My McDonald’s. The program is designed to give customers “multiple complementary reasons to engage with us digitally, such as through mobile ordering, payments, promotions or rewards.” The company’s test of its loyalty programs that began last year in the U.S. is a big part of that.

“We are lucky to have some of the most loyal customers in the industry,” Lucy Brady, McDonald’s chief digital customer engagement officer, said in November, according to a transcript on the financial services site Sentieo. “We want to reward our customers for their loyalty, giving them a compelling reason to download with the app and engage with us consistently and keep them coming back. In turn, the more they engage, the more we learn about them, the better we can anticipate and serve their needs with more personalized experiences and a more targeted approach to value.”

“Customers participating in our loyalty programs visit more often and buy more when they visit.” 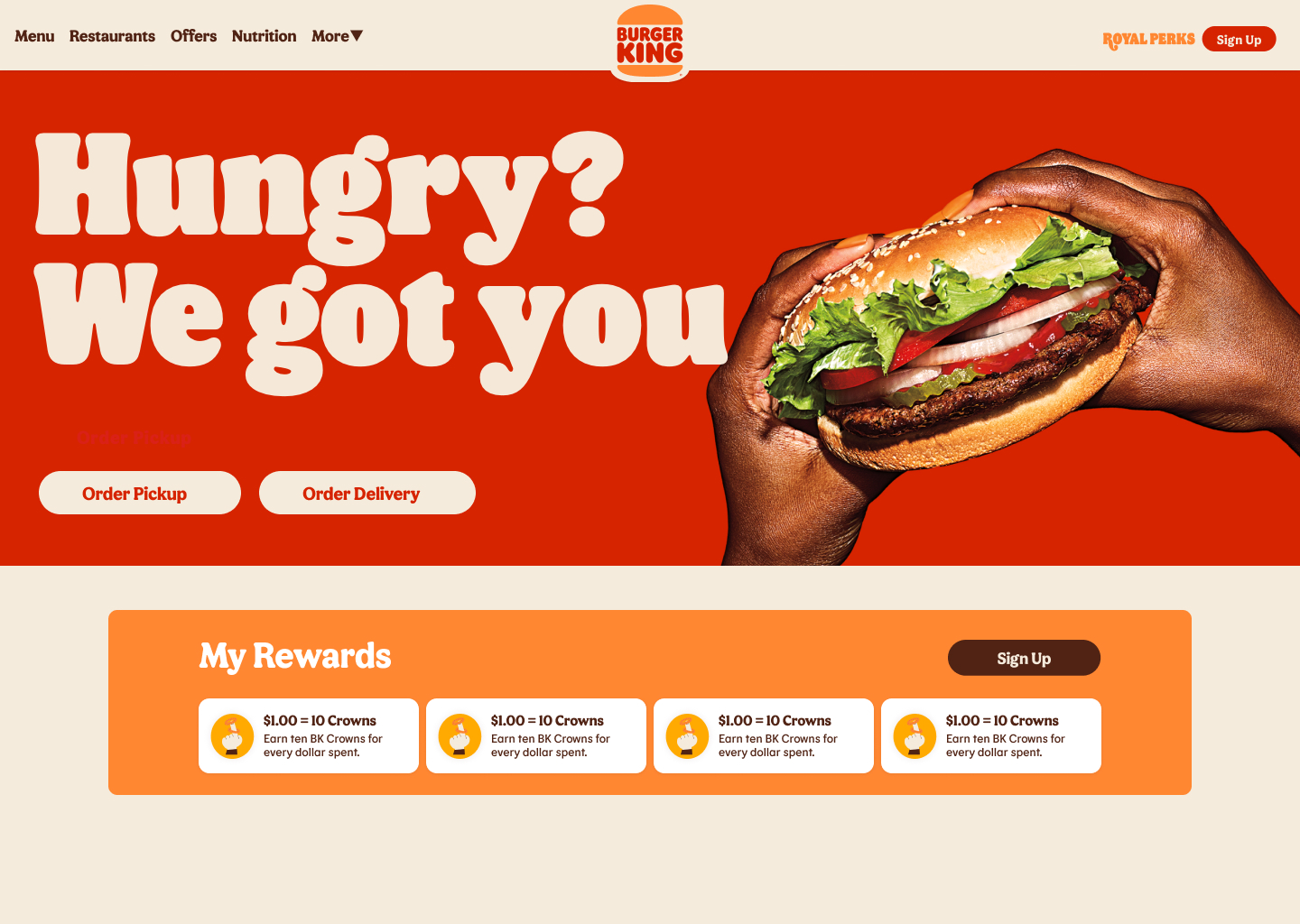 Rival Burger King is also testing a loyalty program starting this year. Its Royal Perks program awards 10 crowns for every $1 spent and lets customers order anything from the menu based on the number of crowns collected. It also lets customers earn points on delivery.

The company is also looking at partnerships with other companies. “We’re really creating something unique,” Whitney Gretz, vice president of digital and loyalty for Burger King, said in an interview.

“It’s a priority for our guests,” she added. “They participate in multiple programs and they see value in them.”

The Pittsburgh-based ice cream chain Bruster’s Real Ice Cream started its program, called Sweet Rewards, in 2018. It gives customers $5 in rewards for every $50 spent and a $3 reward just for signing up.

Rewards are critical to get customers into such programs. “For a customer, what I trade in terms of my information and my frequent visitation, as a loyalty program member, is very frequently free stuff,” Byrne said. “I want free stuff.”

It’s not just the big companies, either. Regional chains are also pushing more loyalty programs, especially if they compete heavily with other chains that already have them.

In February, Dutch Bros Coffee internally launched its Dutch Rewards program and a smartphone app, and it was quickly the No. 2 app on the Apple Store shortly thereafter and has been popular in the official launch since then.

To Company President Joth Ricci, the goal is simple. “If we can simplify the interaction, if we can make it easier for broistas and customers to connect them, then we’ve done a pretty good job,” he said, using the term the company uses for its baristas.

El Pollo Loco’s Loco Rewards program, meanwhile, has seen memberships grow by 40% since the chain improved the program last fall to make it easier for customers to collect benefits.

While customer loyalty programs remain important, however, they’re not the only part of the experience, and companies need to back that up, says Byrne. He notes Chick-fil-A One, the loyalty program run by the Atlanta-based chicken chain. He said that the program integrates well with the chain’s overall culture of strong service.

“It had nothing to do with the ability to tailor a digital marketing piece to a specific customer or understand that this is your 10th time here and therefore we owe you a free lemonade,” Byrne said. “It was more about the meaningful nature of those touchpoints and experiences with the brand every time you visit.

“If there are things that go along with a loyalty program that can individualize my experience, then that is gonna win. But obviously it’s much more than just buy nine and get this free.”