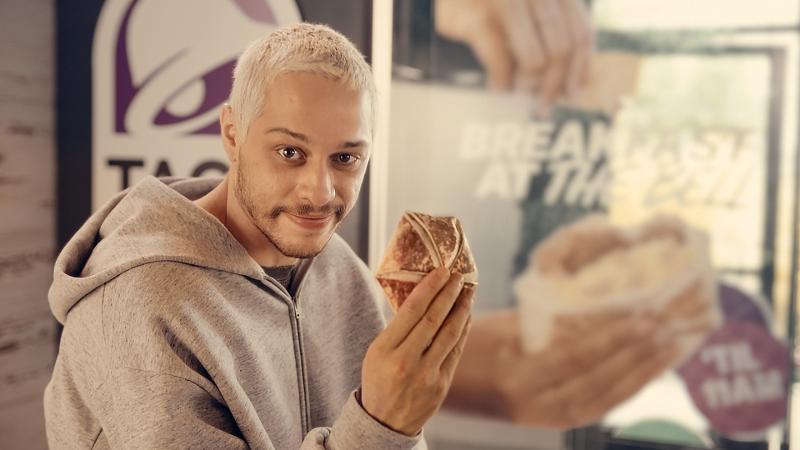 Pete Davidson will appear in ads for Taco Bell as part of an "apology tour" for the chain's breakfast to date. / Photo courtesy of Taco Bell.

Taco Bell apparently plans to apologize for its breakfast strategy to date and is enlisting Pete Davidson to help.

The Mexican fast-food chain is planning to pivot its business in the morning to focus more on “ease and familiarity.”

As such, the company said on Monday, it is enlisting the comedian Davidson to star in ads in which the chain apologizes for “going too far with breakfast innovation.” In the process, the company is suggesting that its menu focus will be simple items that become part of consumers’ breakfast routine.

“There’s a reason it’s called the morning ‘routine,’” the company said in a release. “Now the brand is promising it won’t take its level of innovation intensity to an 11 before 11 a.m. by saying ‘we’re sorry.’”

The “11,” incidentally, is a reference to a bit in the faux documentary This is Spinal Tap.

“Taco Bell got too caught up with today’s hustle and forgot people like to ease into their morning with tasty, simple food,” Davidson said in a statement.

For Taco Bell, the marketing shift comes eight years after the company introduced the daypart, but a year after the daypart returned following a pandemic-related absence. The chain likewise enlisted a celebrity—in that case Lil Nas X—to reintroduce the daypart.

Yet it also faced a more competitive environment for fast-food mornings and a consumer that isn’t commuting as much as he or she did before the pandemic. Wendy’s introduced breakfast in March 2020, just before the pandemic, and appears to be on track to get 10% of its sales in the morning.

McDonald’s, the giant of fast-food breakfast, appears to have recovered its mojo in the morning. Breakfast was the top daypart for the chain in the second quarter, for instance.

That puts some pressure on Taco Bell as it seeks to regain its footing in the morning. Its new campaign appears to suggest that its focus, at least since bringing the daypart back in full last year, hasn’t quite resonated with the morning consumer.

“The pivot in our breakfast strategy aligns with consumers’ morning mentality by turning up our focus on ease and familiarity,” Sean Tresvant, global chief brand officer for Taco Bell, said in a statement.

And thus, Davidson will kick off what the company is calling an “apology tour.” The company said the tour will come in multiple phases. In one 30-second ad spot, Davidson admits Taco Bell “went a bit crazy with breakfast” and suggests that the company serves a simple “breakfast crunch thing” before he realizes that the chain’s Breakfast Crunch Wrap does that.

There is also a “Bell Breakfast” ad in which Davidson dreams of “the most amazing breakfast” before he wakes up inside a Taco Bell.

To highlight that ad, the company will transform three restaurants across the U.S. into that exact experience. The restaurants, on the Las Vegas Strip, in Chicago’s Wrigleyville neighborhood and New York City’s Times Square will be transformed from Oct. 20 to Oct. 23. Seating will be limited. The restaurants will serve breakfast all day.