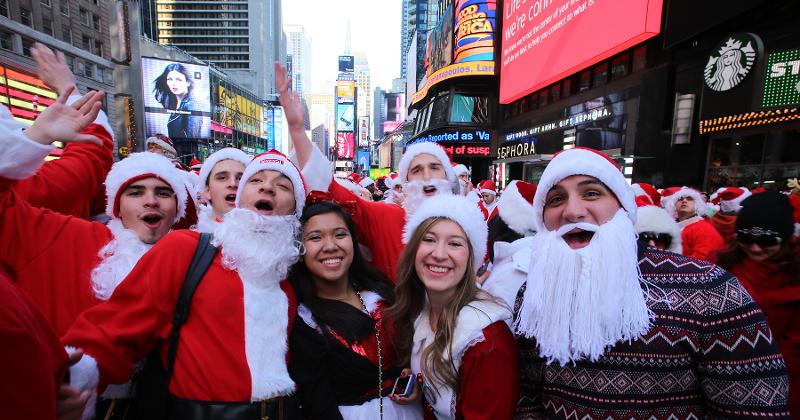 The year-end holidays usually bring merriment and glad tidings, but not always for restaurateurs. One of the East Coast’s standout operators learned it had been cheated out of $364,000, while colleagues in New York City shared advice for keeping lapsed Santa Clauses from elbowing their way to the bar. But at least the business improved its standing on Santa’s nice list by giving a new twist to the standard promotional tactic of a restaurant week.

If those shockers slipped past you, read on.

‘Go away, Santa. And take your empties with you.’

A red tide will hit New York City this weekend when thousands of revelers dress up like Santa Claus and undertake what may be the world’s largest bar crawl. It’s called SantaCon, and it’s no ho-ho-ho for restaurants that are more interested in feeding shoppers and Saturday night regulars than in arguing with a pack of men and women in fake beards about whether they’ve already had enough to drink. The unruly participants have been known to cause all kinds of trouble, naughty list be damned.

That’s why the New York City Hospitality Alliance, a trade group for restaurants and taverns, has armed members with best practices for keeping a slew of Santas from staggering through the door, much less sliding down the chimney. “Some people embrace the event, but if this is one party your business would rather avoid, here are some tips for the day,” the association said in its advisory email.

The six tips range from hiring extra security guards to suspending any drink specials that could make a place stand out more than Rudolph’s nose.

A third of a mil goes missing

Federal prosecutors have charged a bookkeeper for Washington, D.C.’s celebrated Clyde’s Restaurant Group with diverting $364,000 from the multiconcept operator’s safe into her own pocket. According to the news site DCist.com, Jessica Lucas would strive to have more cash on hand than Clyde’s highest volume restaurant, Old Ebbitt Grill, actually needed. She would call the group’s bank and ask for a cash delivery, a request that seemed normal for an establishment grossing more than $34 million annually. Lucas would then allegedly skim some of the funds.

The charges filed by the U.S. Attorney’s Office for the District of Columbia said Lucas was helping herself to the cash for three years, from 2015 to 2018. It seeks a recovery of the funds.

The most shocking aspect of the story may be its familiarity. In December 2012, a former Clyde’s controller pled guilty to embezzling $647,547 from the group. Nancy Preston used corporate funds to pay her personal credit card bills, and used corporate cards for purchases that had nothing to do with Clyde’s restaurants, according to the FBI. She was sentenced to two years in prison and 100 hours of public service.

Clyde’s other restaurants include The Hamilton, 1789 and several restaurants operating under the Clyde’s name.

The 190 restaurants in Poway, Calif., a suburb of San Diego, lost six days of sales last week because of an emergency shutdown of the city’s water system. The establishments were ordered by local health officials to close their doors because unexpectedly heavy rains had overwhelmed the network for supplying the community, leading to a contamination. Residents were advised to boil whatever water they needed, but that option wasn’t feasible for generating the volume needed by restaurants.

Seeing how the restaurants had suffered, city officials and business groups embraced what’s now become a standard way to boost dining traffic during slow stretches. But they gave the concept of a restaurant week a major twist by pulling it together in a matter of days, working in collaboration with local operators. They declared this week to be Emergency Restaurant Week, and encouraged local consumers to show their support with the slogan, “Eat Big, Tip Big.”

The results of the ad hoc restaurant week have yet to be revealed, though local media coverage depicted places bustling with activity.