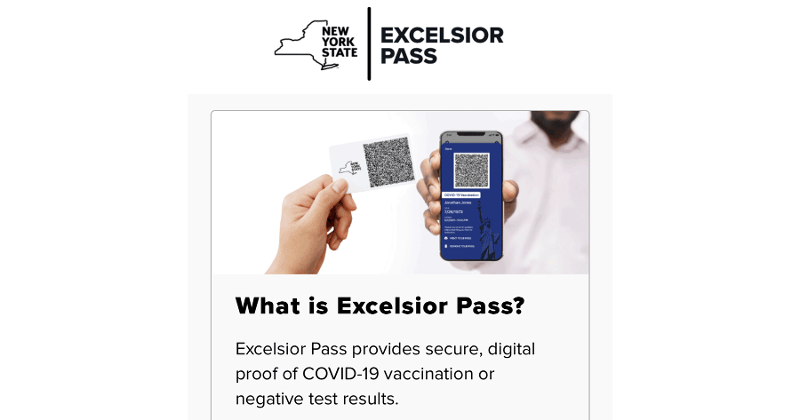 In Israel, you can’t eat inside a restaurant unless you first present a “green pass,” a card or app that proves you’ve been vaccinated against COVID-19.

China has a similar program in place, and the setup is about to be adopted by Japan, the United Kingdom and other European nations as a shortcut back to life as we knew it in pre-pandemic times.

Few restaurateurs seem to realize it’s a model already getting traction here in the United States, with New York ready to issue what’s generically known as a vaccine passport on April 2.

The Empire State version—the Excelsior Pass—could be required for admission to large venues such as concert halls and sports arenas. Restaurants could similarly use it to screen guests.  Even without that tool, some establishments are already limiting indoor seating on pre-announced evenings to patrons who can prove they’ve been inoculated against coronavirus.

Part of the specified benefits of the Excelsior Pass rollout is the opportunity to hold sizeable catered events again, such as parties or weddings. Hundreds of guests could be safely invited to a special occasion again.

Illinois doesn’t have an app, or at least not yet, but it’s already allowing restaurants to enjoy the benefits of having one. Operators there can exceed the state-set caps on indoor seating if the overflow patrons can prove they’ve been vaccinated or have tested negative for COVID within the last one to three days.

Connecticut Gov. Ned Lamont has signaled his support for adopting a pass similar to New York’s.

But those are baby steps compared with the giant leap President Biden would like the country to take as the nation moves closer to herd immunity. Under pressure from the travel industry, the administration is pushing for development through public and private collaboration of a vaccine passport with national potential. The government would set the standards and develop a plug-and-play program that could be adopted by other parties, including state and local jurisdiction, whole industries, or even individual companies. Federal advocates stress that the national government would not require recognition of the passports, and would not collect and keep the information underlying any standardized vaccine passport.

Not all potential stakeholders are enthused about the concept. Florida Gov. Ron DeSantis said this week that he would use his emergency powers to ban vaccine passports by executive order. He also called on the state legislature to permanently ban any such program. He and a number of other Republicans have blasted the concept of a vaccine passport as government overreach and an invasion of the bearer’s privacy.  A similar objection has been raised by at least one lawmaker in Ohio, who has vowed to push a ban through that state.

But advocates note that proofs of vaccination have been required in past pandemics, and are mandated as a condition of attending public school in many areas.

They also point out that the White House has said several times that it will leave vaccine passports to the private sector once an easily adaptable model is hammered out. Spokespeople have said point-blank that the federal government does not intend to collect or hold the information that would underlie any system.

What they don’t have to note is that Biden has delivered so far on every COVID-related promise he made while campaigning for his job. And he’s not identified a system of vaccination passports as a maybe.