“It’s the icing on the icing,” says Kevin Bazner, CEO of A&W Restaurants.

The burger chain ended August with an 8.2% rise in same-store sales, and numbers still being crunched for September show a comparable increase likely to be in double digits. A big part of that, according to Bazner, was A&W’s heritage of developing restaurants in seasonal getaways and areas outside of big population centers. Those were the very areas where many people rode out the COVID-19 crisis as offices closed and big cities turned into COVID hot spots. What were weekend or vacation homes became full-time mountain or lakeside residences, and inner-city apartment dwellers wondered why they were living in a shoebox when they could buy or rent a house in the country at much lower rates. After all, they didn’t need to be near their inner-city jobs any longer.

A&W has traditionally located units in those remoter areas, a carryover from its beginnings as a summertime operation. Part of its pitch to prospective franchisees way back when was the chance to make a year’s worth of income in a six-month stretch in some beautiful summertime getaway. “Peak season for us is more peak than it is for most of the industry,” says Bazner.

Its clientele suddenly swelled, even with sheltering in place.

“We are definitely feeling that, the greater population moving out to these suburban [or] rural communities,” says Bazner. “The other factor was staycations. And college kids were home longer because the schools were closed.

“As importantly now, we’re seeing that continue,” he continues in a mid-October interview. “The summer is longer because people are working remotely. We’re extending out our seasonality.“

The added topspin, he continues, was nostalgia for the brand. Many customers had childhood memories of piling into a station wagon or minivan for a summertime trip to the neighborhood A&W, where they’d munch a burger while watching the ice melt off their frosted mug of root beer.

The enabler, says Bazner, was the drive-thru, a relatively recent service addition in the context of A&W’s long heritage. (The brand celebrated its 100th anniversary in 2019. It may be the only U.S. restaurant chain that can say the current viral crisis is its second pandemic.)

“We realized early on, ‘That was where the business was going to be, so get good at it,’” he explains.

Most stores with a dining room have limited seating. About 40 branches don’t even have that; they still feature drive-ins, where customers pull into a slot and have their meals delivered carside, a la today’s curbside delivery.  “Those units did particularly well,” says Bazner. “They suddenly had six, eight, 10 cars waiting to pick up.” 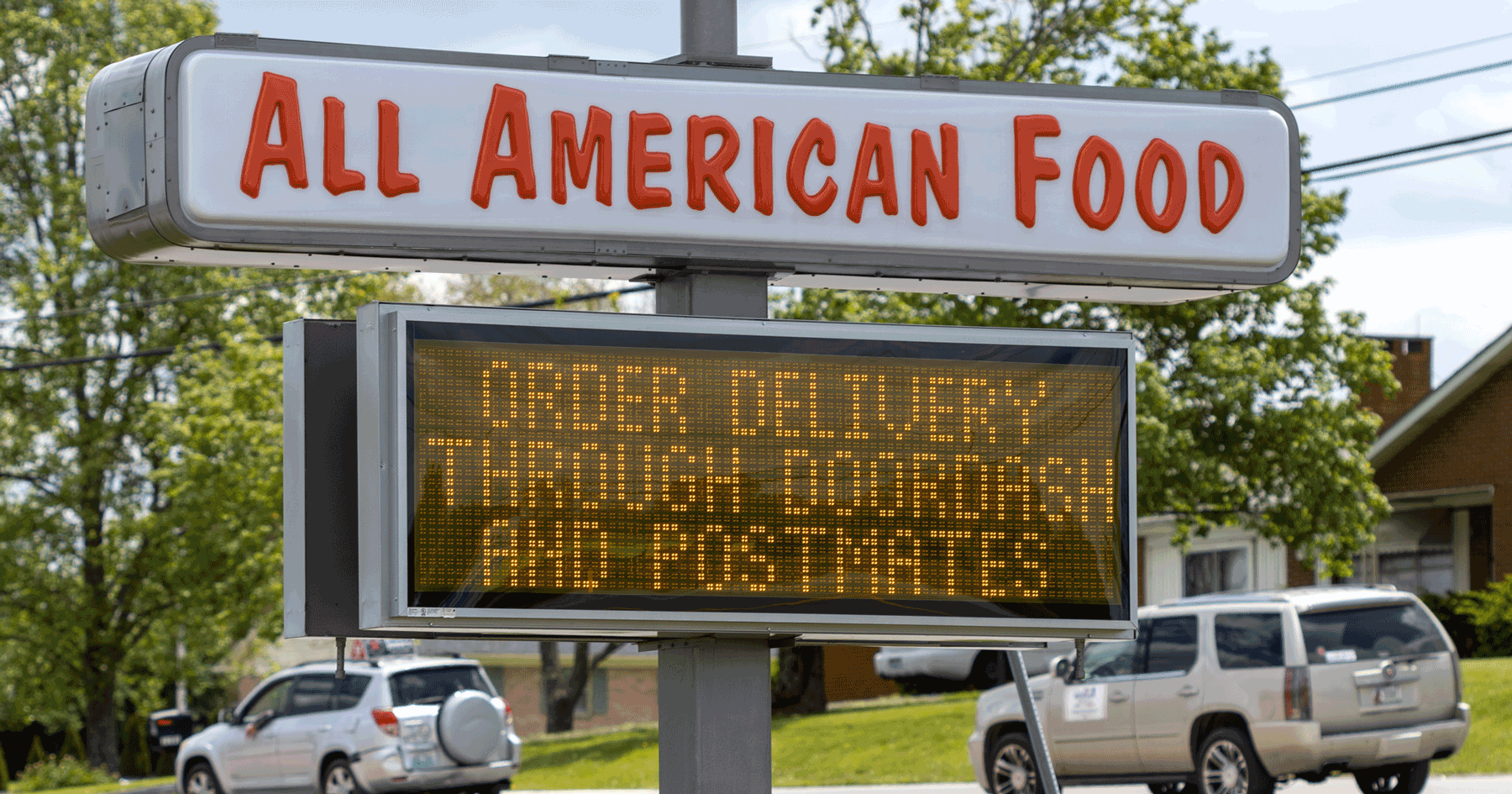 Others tried to maximize throughput while dining rooms were closed by concocting second drive-thrus out of tents and new lane markings in their parking lots.  “It was all about getting as many people as they could through the drive-thru,” Bazner continues.

Many units are still run by families, who earned every penny of their increased sales, according to the CEO. “I visited a unit where the owner came out, took off his mask, and wrung it out—he wrung out the sweat,” he says.

Coincidentally, the franchisor had started experimenting with a drive-thru-only format on a company-owned site. But A&W is unlikely to shift its focus to that streamlined design. “I had a woman in the drive-thru say to me, ‘When can I get a frosted mug again?’” Bazner says by way of explanation. “People still want that frosted mug.” 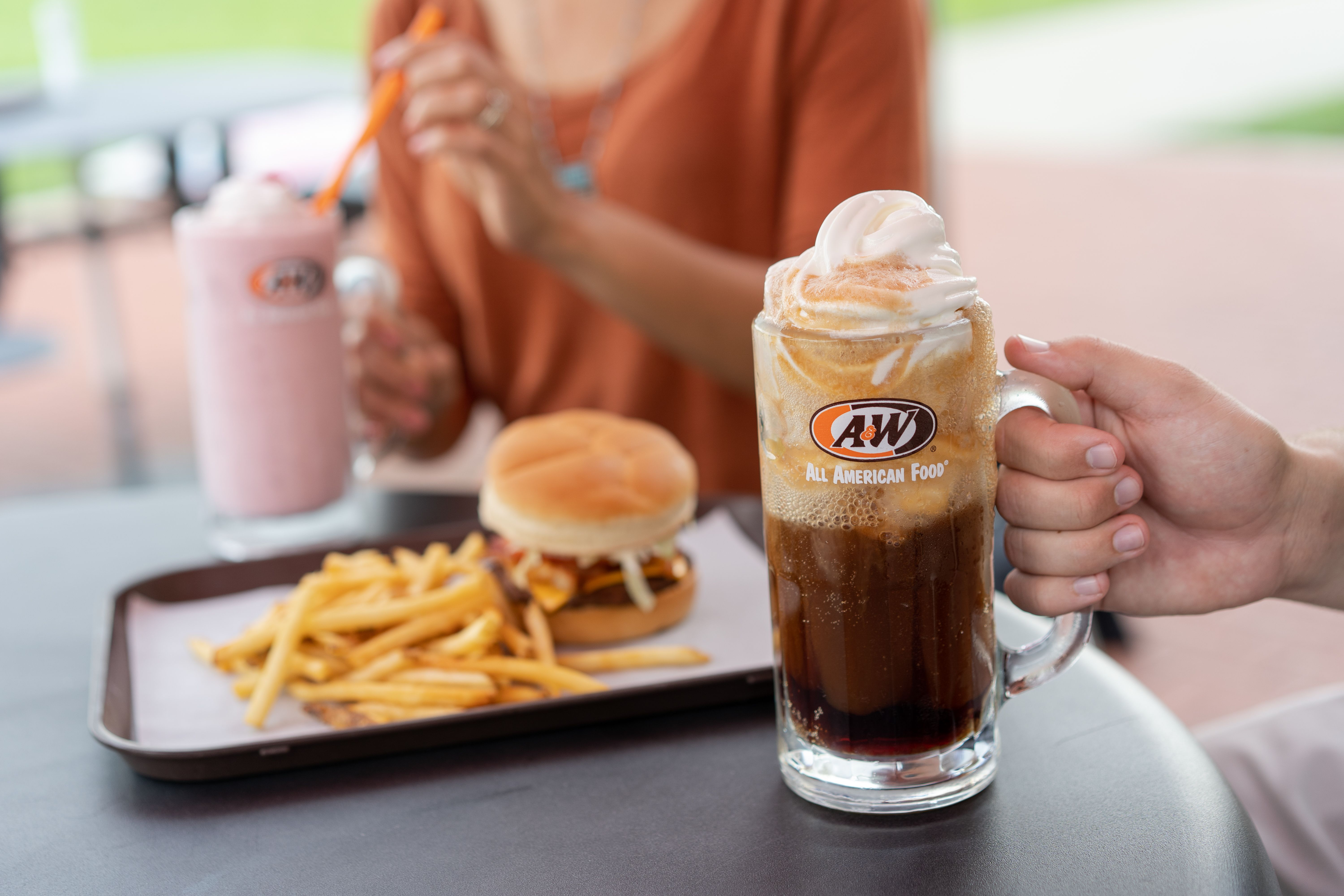 An iced mug of root beer has been the chain’s signature since it started selling the beverage at parades welcoming doughboys home from World War I. The chain has made peace with selling its signature drink in a disposable cup for takeout and drive-thru, but it’s not about to drop a permanent-ware mug that can be iced before being filled.

That’s why the chain had been one of the holdouts against delivery—“you can’t deliver a frosty glass mug,” says Bazner, the lead skeptic of third-party delivery arrangements. He yielded somewhat during the pandemic, allowing franchisees to partner with third parties, but not requiring them to offer the service.

He notes that the units benefitting the most from delivery tend to be the ones paired with a KFC branch, a carryover from the days both concepts were owned by Yum Brands. A full-bore commitment to delivery has been a major strategic aim of  KFC.

There’s also the problem with the chain’s preference for relatively remote locations. “A third of our system is located in areas that don’t have a delivery provider,” he explained. “I ask my franchisees about delivery, and between that problem and the charges, they tell me, ‘I’d rather find a way to get more orders through my drive-thru.’”