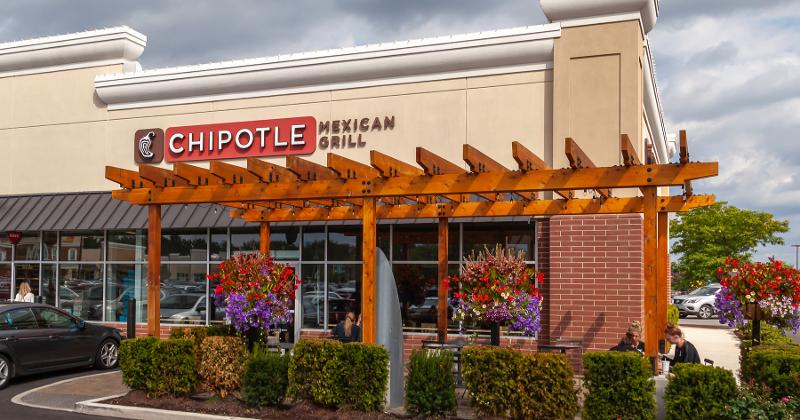 The Newport Beach, Calif.-based fast casual announced Wednesday that its revenue increased 23.4% during the first quarter, to $1.7 billion.

Digital sales grew 133.9% during the period ended March 31, finally tipping the balance at 50.1% of all transactions.

The chain’s operating margin, which Chipotle had struggled with because of the high cost of delivery, was 22.3%, an increase of 17.6% year over year. The chain said the boost was due to same-store sales growth and menu price increases, partially offset by higher wages and delivery costs.

In recent months, Chipotle has boosted delivery prices by 17%.

"We've seen very little resistance at this point," Chief Restaurant Officer Scott Boatwright said of customer reaction to the increase. "If any resistance has happened, it has moved people into order ahead and pickup."

Digital sales, which were $869.8 million in Q1, remain the major area of growth for Chipotle. Just over half of those sales came from order-ahead transactions via the chain’s wildly successful Chipotlanes.

Chipotle opened 40 new restaurants during the quarter and 26 included a Chipotlane, which are known for boosting check averages and guest frequency because of the convenience. The pickup orders also don’t impact Chipotle’s margins like delivery orders do.

The chain currently has 196 Chipotlanes in its system. It plans to open at least 200 restaurants this year, with more than 70% of them including the order ahead-pickup lanes.

“Chipotle is off to a great start in 2021 thanks to our employees and their incredible level of collaboration and tireless dedication,” CEO Brian Niccol said in a statement. “As  vaccines roll out and we get closer to moving past this pandemic, I believe Chipotle is well positioned for growth."

The chain, which has 2,803 units, said it expects its same-store sales to climb up to 30% during Q2 thanks to a normalizing of quesadilla orders and lower marketing investment.

Chipotle’s stock has more than doubled during the past 12 months and shows no signs of slowing, setting a record of more than $1,567 earlier this month.

Update: This story has been edited to correct Scott Boatwright's title to chief restaurant officer.