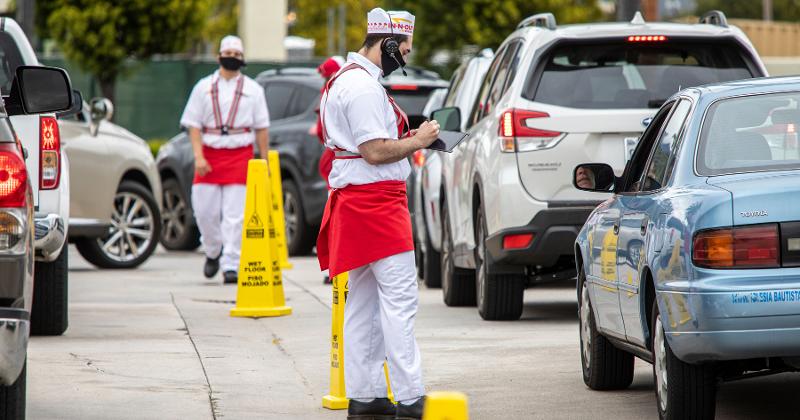 With coronavirus infections accelerating in many states, government officials are increasing both the safety measures required from restaurants and other businesses and the penalties applied if they fail to comply.

The most common step appears to be a switch from recommending face coverings for employees and guests to ordering the masks be worn. California, the nation’s largest restaurant market, issued an across-the-board requirement yesterday. Oregon followed suit, with Gov. Kate Brown imposing a requirement on several counties with rising COVID-19 measures.

What are believed to be dozens of counties and municipalities have also imposed a mandate in the last few days, taking the action when their states didn’t. In Texas, for instance, restaurant-rich Dallas County instituted a mask requirement Friday morning, following the lead of Bexar and Hidalgo Counties last week.

The City Council of Montgomery, Ala., refused to pass a requirement that all citizens wear facemasks while in public, despite a steep climb in coronavirus cases and fatalities. Acknowledging his frustration, Mayor Steven Reed imposed the mandate by executive order. Starting Friday at 5 p.m., any one in a public space with 10 or more people in attendance will be required to wear a face covering. Violators will be fined $25 each time they refuse.

So many local and county stipulations have been adopted in the state, the nation’s second largest restaurant market, that the Texas Restaurant Association (TRA) now favors a statewide requirement. When Gov. Greg Abbott initially aired his reopening plan for the state, the association noted with seeming approval that the decision of whether to require masks had been left to individual restaurants.

“At this point, we’d prefer a statewide solution,” TRA CEO Emily Knight said at a press briefing this morning. She explained that an across-the-board standard would spare chains from a regulatory patchwork that varies from one jurisdiction to the next. It would also raise consumers’ awareness that they’re required to wear masks, instead of leaving restaurants to do the educating and potentially drawing the wrath of guests who see no reason to cover their mouths and nose, Wright said.

She and other association officials contended during the event that restaurants are being unduly faulted for failing to abide by recommended safety protocols and thereby fueling the resurgences of COVID-19.  They asserted that the media has focused intently on restaurants reclosing because employees had tested positive for coronavirus, when in fact every industry dealing directly with the public has been similarly affected.

“This is not unique to restaurants, despite what you see in the headlines,” said Kelsey Erickson Streufert, the TRA’s VP of government affairs and advocacy.

To enhance restaurant safety and bolster the public’s trust, the association plans to launch a safety training and certification program next week, Knight said.

One of the states that has seen its COVID-19 numbers continue to plunge is New York, formerly the nation’s hot spot. Gov. Andrew Cuomo said yesterday that he intends to keep the statistics moving in the right direction by cracking down on restaurants and bars that fail to heed his reopening safety protocols. He said he will issue an executive order to allow state authorities to instantly revoke the liquor licenses of restaurants and bars that disregard the state’s reopening rules, including the requirement that staff and guests wear facemasks. Cuomo said he'll also require establishments to ensure social distancing within 100 feet of their premises. Any “business that is violating the rules could have an immediate shutdown order,” he said at his daily press briefing.

Other efforts are underway to turn restaurant customers into safety monitors. Yelp, the popular citizen-review app and restaurant guide, said Tuesday that it will add a field in its listings where restaurants can list what they’re doing to keep guests safe from coronavirus. Patrons will be invited to validate the efforts, or blow the whistle on places that aren’t doing what they pledge to do.

A secret-shopper service called A Closer Look and a technology supplier named Quiq sa they're working with the Atlanta Restaurant Association and the TRA to roll out an app that allows consumers to verify the safety of restaurants they visit by texting the word “Safe” if the place appears to be adhering to recommended safety protocols.