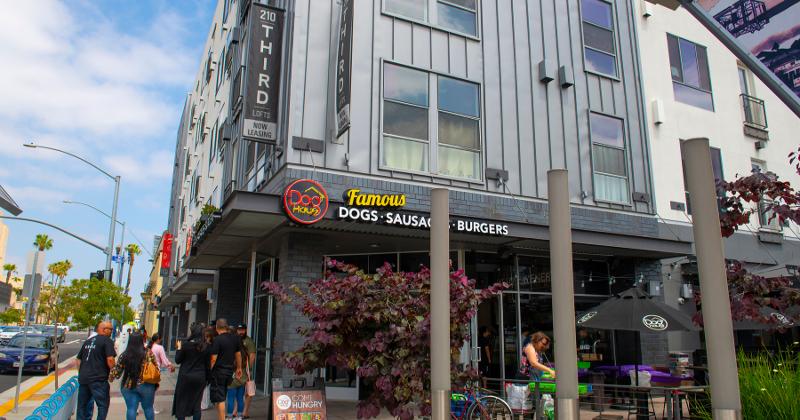 Dog Haus is making plans for an ambitious new prototype.

The fast-casual gourmet hot dog chain, which has 40 traditional restaurants and nine ghost kitchens, has not yet opened a restaurant with a drive-thru.

It is slated to have one drive-thru unit later this year, when a franchisee opens the chain’s first in West Virginia.

But the Pasadena, Calif.-based chain recently released preliminary plans for a new prototype, one that has a traditional drive-thru plus an order-ahead pick-up lane to be used by customers as well as third-party delivery drivers.

It’ll likely be the end of next year or even early 2023 before the new design is open to the public, Dog Haus founding partner Quasim Riaz said.

The second drive-thru is located just off the kitchen. Back-of-house workers can simply drop the food into lockers, to be picked up by drivers on the other side of the wall. A QR code tells the customer which locker to open and pops it open, Riaz said.

“The world has changed,” he said. “Now there’s mobile order-pickup. We wanted to do something that was more with the times.”

Convenience has long been at the heart of Dog Haus’ operations. The chain was an early adopter of virtual brands, launching several of them at the very outset of the pandemic. The concepts were created by looking at the most popular searches on third-party delivery apps.

The move was an “in case of emergency, break glass” pivot that has turned out to be a big success for the chain, Riaz said.

“We saw tremendous success,” he said. “We believe when this pandemic finally gets behind us, (consumers) are going to develop habits they’re not going to let go of. We believe this was not just a sign of the times, this was a changing of the times.”

Dog Haus’ new store design will retain the same number of seats as its previous locations, though the design will refine the brand’s industrial look for more of a post-modern vibe. It will feature a covered patio with a floor-to-ceiling fireplace.