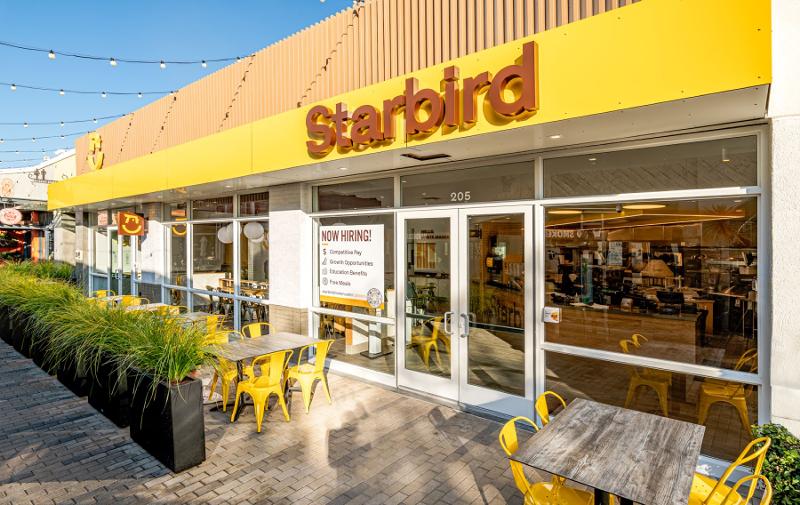 Aaron Noveshen, CEO of 12-unit Starbird, believes his tech-forward fast-casual chicken concept is ready to embark on a new adventure.

Noveshen said documents are being finalized to open the brand to franchising as early as next month.

A successful licensing agreement with an operator at San Francisco Airport proved that Starbird, which received a $12 million cash infusion from private-equity firm KarpReilly in November, can be well-run by a franchisee, he said.

He said the chain will continue to open its own stores, but it is looking to franchising to speed the pace of growth.

Starbird intends to double its unit count over the next 18 months, he said, with its first franchised stores likely to open in the first part of 2023. The chain also has four ghost kitchens, with plans to grow in that area as well.

“It’s really to be determined because it’s new space,” he said. “We want to make sure we don’t build things without making sure everyone’s winning … It’s a long game. That’s the next part of our business to really prove out.”

Starbird was founded in San Francisco in 2016 by restaurant consultancy The Culinary Edge, after Noveshen and his partners there decided chicken would be the next big restaurant industry growth area.

“Our virtual brand approach is really this mindset of a branded house,” he said. “We are Starbird first. We’ve really grown our Starbird Salads brand; that’s been fantastic for us.”

Starbird may add new virtual concepts or “sunset” current ones in the future, he said, especially with franchising on the horizon.

“Our approach is not to create operational complexity,” he said.

Since its founding, Starbird has been known for its digital focus. The concept doesn’t currently operate drive-thrus, but Noveshen said there’s potential to work with a partner to create a “drive-thru of the future” that would prioritize speedy pick-ups through voice recognition technology.

Recently, the chain installed kiosks in all of its restaurants. They have helped push digital transactions to 85% of all sales, while also boosting check averages, engagement and overall satisfaction.

“We always want to meet the customer where they want to be met,” he said.

Right now, he said, Starbird is laser-focused on finding the right franchise partners. The chain is on the hunt for experienced, multi-unit operators who have a track record with restaurants that have “high culinary appeal,” he said.

Ideally, Starbird would partner with franchisees who can teach the chicken chain as much as they’ll be learning, Noveshen said.

“Great ideas come from operations,” he said. “The people who are in there, in the trenches every day, always thinking of ways to do things more consistently. We’ve learned so much from our team members. Working with a franchise group, we’d like to collaborate to make ourselves better every day.”

UPDATE: This story has been updated to correct the spelling of Starbird CEO Aaron Noveshen's name.