Maybe no restaurant chain in the U.S. has been under as big of a microscope as the one Chipotle Mexican Grill is under right now.

Think about it: One mistake by a part-time worker in one specific part of the country can get blown up on social media, setting back months of work by the executives at the chain to regain consumer faith lost during a series of food safety incidents in 2015.

Much of the responsibility for ensuring that doesn’t happen falls to Scott Boatwright, brought in from Arby’s in 2017 as the chain’s chief restaurant officer. And while he fully acknowledges the pressure that comes with the job, Boatwright is not daunted by the task. He relishes it, in fact.

“It’s enormous,” he says. “But it’s a responsibility I welcome and enjoy.”

Boatwright made a presentation at the Restaurant Leadership Conference in Phoenix, and later sat down with Restaurant Business for an interview.

Boatwright described the significant changes Chipotle has made to its operations since his arrival one year ago, as well as the voice that his new boss, Brian Niccol, has brought since he became Chipotle’s CEO in March.

Chipotle had become one of the most successful restaurant chains in history in the summer of 2015, with a stock price above $750 a share. Store-level profits were so strong that the chain could pay off a new unit in just 18 months; most chains are thrilled at three years. Unit volumes were approaching $2.5 million.

The food safety incidents, including a multistate E. coli outbreak, salmonella in Minnesota and norovirus in California, eroded consumer faith in the chain. The stock price was cut in half, and unit volumes fell below $2 million—good for any normal chain, but not the standard to which Chipotle and its investors had grown accustomed.

The sales challenges also revealed operations problems that led the company to bring in an outside executive in Boatwright for the first time since its 2006 IPO. He’s since been joined by Niccol, hired away from Taco Bell, new Chief Marketing Officer Chris Brandt from Bloomin’ Brands, and Chief Human Resources Officer Marissa Andrada from Kate Spade.

Boatwright says that Niccol “brings to the organization a skill set for us to really deliver on the expectations today, but really build the Chipotle of tomorrow.”

“He’s strong [with] culture and building an organization of highly engaged, motivated and proficient team members throughout the organization. He also brings branding and marketing expertise that is probably necessary for us to move transactions in meaningful way.”

Boatwright was honest about the task he faced when he arrived at the company a year ago, telling a crowd at the conference that he was “surprised by everything when I joined Chipotle.”

“The ground is shifting under our feet, and holding on to the past way we’ve run restaurants isn’t the way we are going to do business going forward,” he said.

That’s what led him to throw out some of Chipotle’s typical ways of operating from the home office, turning to technology to drive the brand forward. “I recognized very quickly that the organization needed clear direction and a clear strategy to more importantly deliver a great guest experience in a food-safe environment,” he says.

“There was a lot of low-hanging fruit.” That included in field leadership. He says the company was “top-heavy,” while field leaders and district managers were left with 12 to 15 restaurants apiece, which he says, in his opinion, is far too many. “At that level of responsibility, you are oftentimes firefighting versus running the business,” Boatwright says. “It becomes a very reactionary business, versus moving the operation forward.”

Another piece of low-hanging fruit was training, which was “not in our DNA.” Training came “through tribal knowledge, with information passing down from person to person, which, as you know, gets diluted over time and doesn’t lead to consistently great guest experience,” Boatwright says.

“As the discipline and the rigor necessary to run a consistently great restaurant began to wane, you’re left with a culture where people weren’t delivering on expectations—or more importantly didn’t understand expectations and their role in the organization,” he says. “It was a little bit of the wild west.” Boatwright has since switched the chain to a structured, mobile-based training program, which he says has been very successful thus far.

Among his first initiatives was to add several mobile-based back-of-house user interfaces for training, field leader management and other operational functions. To do so, Chipotle partnered with multiple different vendors and brought iPads into each restaurant.

“Moving training out to the kitchen or the dining room really frees the organization from having to make choices on this or that,” Boatwright says. “Mobile plays a larger role.” And it also helps assure that information is up-to-date and usable in real time.

The adoption cycle wasn’t seamless. It took time for people to understand the technology. But Boatwright told the conference that it has helped cut turnover by 40% to 42%.

Chipotle also established more clear roles throughout the entire field hierarchy. Field leaders and district managers are scaling back. “Any more than eight direct reports is probably too much,” Boatwright said.

Across the board, Chipotle established what Boatwright calls the top five responsibilities for each position, giving everyone an operating construct from which to make decisions. “People adopted it very quickly,” Boatwright says. “They were eager for leadership and direction. The organization began to rally around the idea of role clarity.”

The company began working on training materials to provide the amount of training necessary on systems, customer experience and food safety. 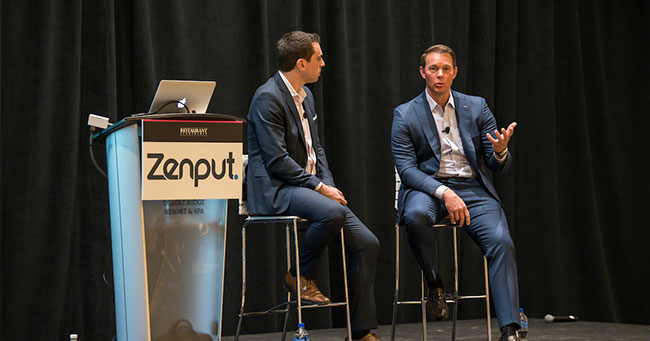 Chipotle also reworked its well-known Restaurateur program, in which top-performing managers were given the title, along with a pay raise, a car and a phone. “It was very lucrative,” Boatwright says. But, he adds, “There really wasn’t value for the organization long-term.”

The problem, he says, is that people who gained that status kept it, regardless of the condition of their restaurant down the line—almost like tenure. “There was no consequence as to maintaining the restaurant over time,” Boatwright says.

Now, the restaurant has to maintain its “A” status for the Restaurateur to keep the accreditation. Whenever a restaurant falls out of that status, the problems have to be fixed, or the title lost. “That has paid huge dividends,” Boatwright says.

The company is also spending a lot more time on food safety. It developed a program that its employees go through in the fourth quarter, and all new hires complete before they start work. The training “changed behavior and the culture around the organization,” Boatwright says.

Chipotle also created a leadership program in Denver called Cultivate U, with a classroom training curriculum and a learning lab inside a nearby Chipotle restaurant. The idea is to teach time management, situational leadership, performance coaching and management instruction.

This year, Chipotle is bringing all 340 of its field leaders to Denver at a “significant expense” to put them through the program. “There was a significant gap in leadership development at Chipotle when I arrived last May,” he says. “The organization hadn’t the resources necessary to teach above-store leadership the ability to lead large teams.”

Moving the brand into the future

In addition to improving the company’s operations, Chipotle has also worked to get ready for a rapidly growing generation of customers who prefer ordering online or through mobile. All but 125 of the chain’s locations now have a second makeline specifically for those orders—and those that don’t are limited by size restrictions.

That makeline does require more people, but Boatwright says it’s worth the investment. “I think about the kitchen at Chipotle as a centralized commissary,” he says. “That kitchen is producing food for two different outlets. You have to thoughtfully consider how you staff it, how do you ensure that the line stays stocked with high-quality food, and at what break points you add people to the line.”

He said that the company’s analysis shows that the profitability of the second line exceeds its traditional restaurants. “Labor is only a small component of the second makeline,” he says, calling it “incremental.”

Indeed, the challenge for Chipotle now is to restore the factor that made the chain so successful. To “restore the love,” a phrase Chipotle has in its strategic plan, “It all starts with great operations.”

“Then we think thoughtfully about how we introduce new ideas and innovation around the menu that creates buzzworthy news, that brings in new and lapsed users to see that Chipotle experience has improved,” Boatwright says. And then, he says, Chipotle has to “get our front foot in the social media space.”