The Winston-Salem, N.C.-based doughnut chain said on Monday that it plans to open a massive, 4,500-square-foot location to Times Square next year.

The company expects that the location will serve more customers every year than any other location in the world.

The flagship “will showcase our brand on the global stage and inspire customer wonder,” Krispy Kreme CEO Michael Tattersfield said in a statement.

The shop will be on the corner of Broadway and 48th Street and will feature the world’s largest “Hot Now” sign at the top.

The company says it will be open 24 hours and will feature “immersive and interactive digital experiences” as well as merchandise exclusive to the location.

The location will showcase the company’s doughnut-making process, featuring stadium-style seating in front of the chain’s “doughnut theater.”

It will also include an exterior walk-up window where customers can purchase doughnuts and coffee, and a grab-and-go counter inside. 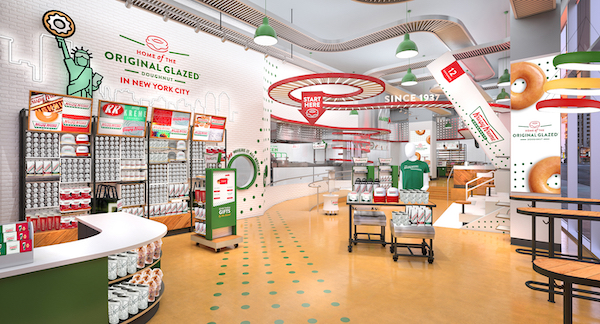 Krispy Kreme's interior will have grab-and-go cases and a "doughnut theater" with stadium-style seating./Photo courtesy of Krispy Kreme

The location would represent a major milestone for the chain. It brings a flagship location back to a city that symbolized its rise to ultrapopularity in the late 1990s followed by its rather infamous decline in the early 2000s.

Krispy Kreme’s first flagship location in the city drew long lines in the late 1990s until it was quietly closed less than a decade later. The chain has had a location in Jersey City and a small location in New York’s Penn Station.

The company has made an impressive comeback in the U.S. in recent years, even as it has continued to expand internationally. System sales rose by 4.5% in 2018, according to data from Restaurant Business sister company Technomic. Krispy Kreme operates 355 U.S. locations and 1,400 worldwide.

The chain isn’t the only concept putting a major new flagship location in Times Square. McDonald’s recently opened a new, three-story restaurant there.