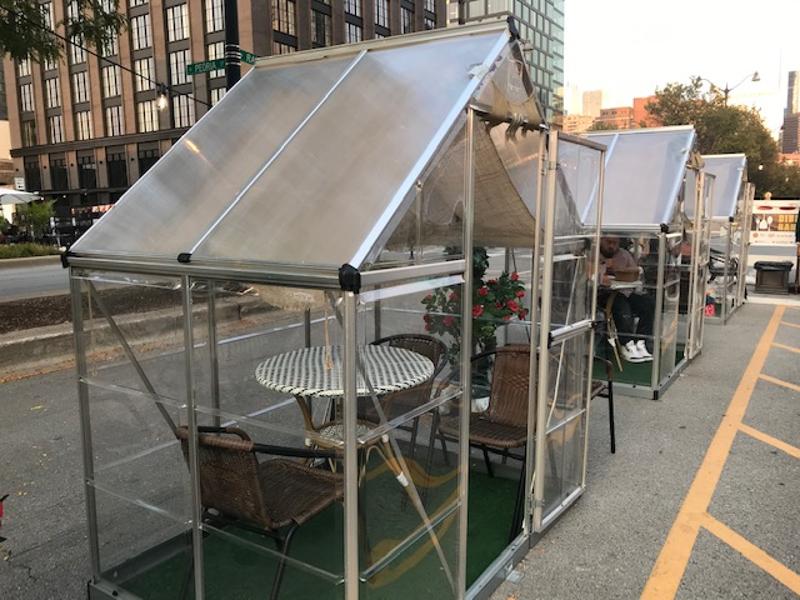 With the omicron surge clearly waning, restaurants are showing they’re of two minds on the recovery help they want from government officials near-term. Like by the weekend.

While pushing for a quick end to the mask and vaccine mandates that were imposed as COVID infections soared, operators are pressing statehouses and city councils to turn other emergency measures into permanent options. Topping that list are permission to keep the outdoor dining structures that were hastily constructed to provide outdoor seating, and an OK to keep selling alcohol to-go.

The amped-up lobbying has an urgency because the moves could significantly affect sales during two significant business boosters this weekend, the Super Bowl and Valentine’s Day.

The efforts are in addition to the industry’s continued push to wrest more direct financial aid from the federal government. The Independent Restaurant Coalition said that 10,000 operators called their congressional representatives to voice support for re-upping the Restaurant Revitalization Fund.

The for-and-against dual mindset is evident from California, where restaurateurs are lobbying hard for a permanent OK to sell takeout adult beverages, to Rhode Island, where business groups are pressuring the governor to lift mask requirements for dine-in restaurant patrons.

New York Gov. Kathy Hochul obliged a variety of business and citizen groups by declining to renew her state’s mandate that dine-in restaurant guests either wear a mask or show proof of being vaccinated. The requirement was effectively dead as of Thursday.

California’s requirement that masks be worn in restaurants is slated to end Feb. 15.

Meanwhile, New York City restaurants are pushing for an OK to keep the igloos, huts and other snug enclosures that popped up on sidewalks early in the pandemic to provide more outdoor seating. Though enclosed, the structures were believed to provide more protection from the coronavirus than indoor dining.

The shelters were readily OK'd because restaurants needed assistance and the facilities were expected to be temporary. But operators say they’re not reliant on the additional capacity to cover their costs. In a survey conducted by the New York City Hospitality Alliance, a trade group for restaurants and bars, 91% of restaurants said the structures are very important to their survival.

“Outdoor dining was an absolute lifeline for restaurants and bars that were financially devastated by the COVID-19 pandemic,” Andrew Rigie, the alliance’s executive director, said in a statement. “Since its inception, the Open Restaurants Program has saved 100,000 industry jobs and thousands of small businesses from financial collapse, and an overwhelming majority of hospitality customers love it.”

The group wants the city to draft regulations to maintain the sidewalk additions. It faces considerable opposition from residents who say the facilities have added to the city’s litter, late-night noise and rodent infestation.