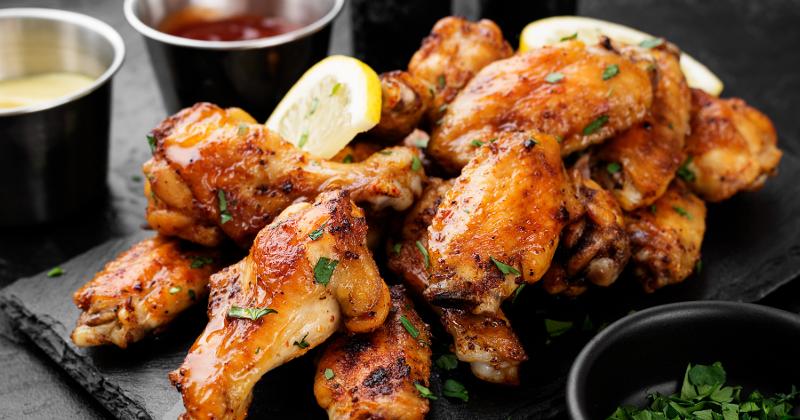 With little more than a week before Super Bowl LVI, there’s good news and bad news when it comes to chicken wings—the unofficial gametime nosh.

Wholesale wing prices are down 19% from their high last May, according to USDA data cited by the National Chicken Council (NCC) in its 2022 Wing Report. But retail wing prices are up about 30 cents per pound compared with last year.

“There will be no wing shortage,” Tom Super, NCC spokesman, said in a statement. “Like almost anything else you buy right now, wings might be a little more expensive, but they’ll be stocked.”

It’s estimated that Americans will consume 1.42 billion wings while watching the Cincinnati Bengals play the Los Angeles Rams on February 13, according to the NCC.

“Demand for chicken wings has been through the roof since the beginning of the pandemic,” Super said. “A shift from sit-down restaurants to takeout and quick service has boosted chicken wing consumption.”

Chicken producers worked to meet the surging demand last year, diverting some chickens originally slated to be sold as whole birds to be processed for parts. By the end of December, frozen wing inventory totaled 73.2 million pounds, up 70% from the previous year, the NCC said.

Wing sales in Cincinnati are up nearly 28% and they’re up more than 37% in Los Angeles since NFL playoff games began, according to NCC.

Those who make their living off chicken wings don’t seem to think the price increases will end anytime soon.

In November, Wingstop said it would raise prices about 10% during 2021 to compensate for soaring food costs. The 1,500-unit chain typically takes 1% to 2% in pricing annually.

The high cost of wings is leading Wingstop and Atomic Wings, too, to start selling less expensive chicken thighs as an alternative.

“The environment we’re in, which we don’t believe is transitory in any way, shape or form, is driving the need to take price,” CEO Charlie Morrison told investors. “This will be a level-set for the future …”