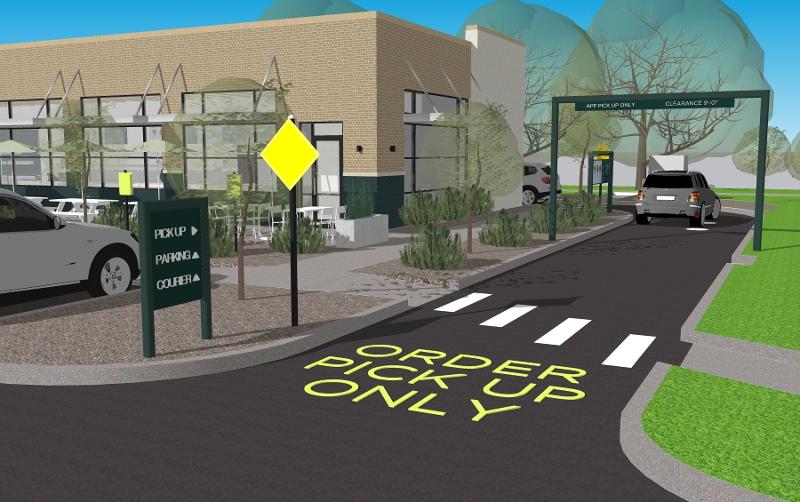 Sweetgreen on Wednesday announced it will open its first order-ahead, pick-up drive-thru lane, slated for Schaumburg, Ill., within the next year.

The Los Angeles-based chain, which began as a largely urban concept, is trying hard to broaden its suburban reach with many of its city-based customers still working from home.

Sweetgreen’s first Sweetlane will require customers to place a digital order on its website or app before pulling through the drive-thru to pick up their salad. Pick-up orders can also be placed inside the restaurant, which will also include a dining area.

The drive-thru will feature a round observation window so drivers can watch their orders being prepared, “bringing the in-store experience to our drive-thru digital customers,” the chain said in a statement.

“Digital customers are our most habitual users, and we believe this new format will provide us with more options to connect people to real food,” Sweetgreen co-founder and Chief Concept Officer Nicolas Jammet said in a statement.

In December 2020, Sweetgreen announced plans to open its first drive-thru, a high-tech operation it dubbed a “drive-in,” in Highlands Ranch, Colo., during the winter of 2021.

But the chain currently has no listing on its website for a store in that location, nor are there any media reports or mentions from the company in its calls with analysts about the drive-thru’s opening.

A spokesperson for Sweetgreen did not immediately respond to a Restaurant Business question about whether the company has existing drive-thru locations.

That Sweetgreen would look to get into drive-thrus is not especially surprising.

The salad chain said multiple times in its IPO filing last November that it would actively pursue new store formats, including drive-thrus, as well as expanding its multi-channel approach and the development of hybrid restaurants.

About half of Sweetgreen’s 2021 revenue came through its digital channels, the company reported.

Drive-thrus go hand-in-hand with the chain’s broader push into the suburbs.

In 2021, the chain opened 31 new restaurants—13 of them in cities and 18 in suburban, residential markets. The company declined to make public its sales figures for those two markets.

But there’s little question that the slow return of downtown office workers, fueled by the pandemic’s unpredictability, has hit Sweetgreen’s sales.

“It is uncertain whether workers will return to offices in urban centers, such as midtown Manhattan or downtown Chicago, on a consistent basis, and even if they do, whether they will have a more flexible work schedule, which could reduce our revenues at our urban locations,” the chain said in its 2021 annual report. “If the shift toward remote work continues even after the COVID-19 pandemic has abated or ended and workers do not return to offices in urban centers, or work from those locations less frequently, our business, financial condition, and results of operations could be adversely affected for an uncertain period of time.”

Many chains have emulated Chipotle’s order-ahead, pick-up Chipotlanes since the fast casual introduced them in 2019. Chipotle saw such early success with the drive-thrus, it fast-tracked their expansion. By 2020, the chain was opening its 100th Chipotlane.

Last year, Chipotle opened 215 new stores, about 80% of which included the drive-thru, which has long proven to boost sales and margins. Chipotle is so bullish on its Chipotlanes, it has been adding them to existing units or even relocating stores to drive-thru-friendly spots.