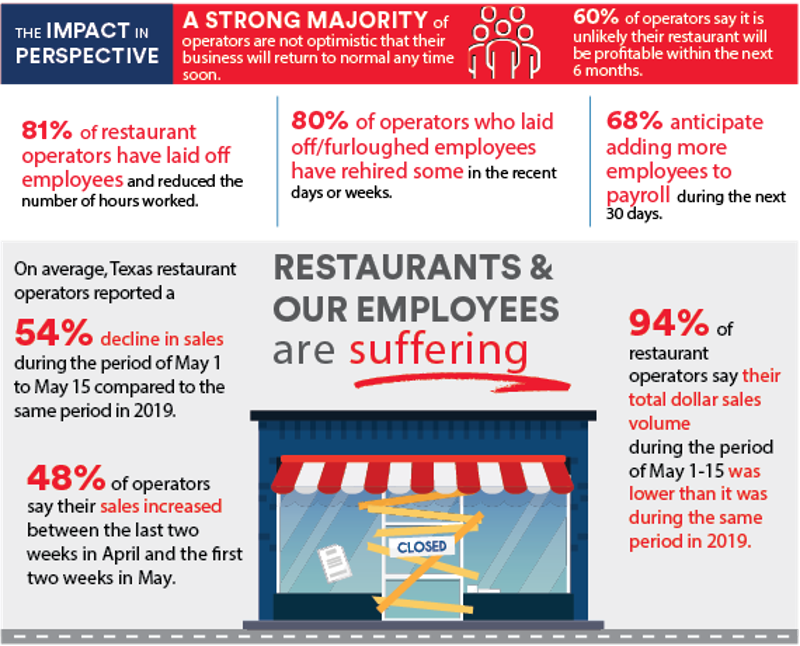 Texas’ reopening of dining rooms has been a mixed experience for the state’s full-service restaurants, with operators roughly split in their assessments of the returning traffic, according to a survey by the Texas Restaurant Association (TRA).

Nearly 28% of the participating full-service restaurants said the volume of dine-in customers has been “steady,” while 26.3%  characterized it as “slow.” Only 1.4% reported they’d been “packed,” while 12.4% rated the traffic as “very slow.”

Restaurants in Texas, which sports more eateries than any other state except California, were given a go-ahead to reopen dining rooms at 25% of their pre-pandemic capacities starting on May 22. The state was one of the first to okay the resumption of dine-in service.

The seating limit has since been raised to 50% of total capacity, with the threshold set to be raised to 75% on Friday.

Dining establishments have largely kept pace with the graduated resumption of on-premise service. Two-thirds (66.5%) of the respondents—limited-service as well as full-service places—are now using 50% of their total seating, according to the TRA data. About 1 in 10 (12.6%) remain closed altogether. About a third (29.5%) of multi-unit operations have reopened all of their branches.

The resumption of dine-in business hasn’t triggered an abandonment of the services that many places adopted to keep themselves afloat while on-premise business was banned, the numbers show. The TRA found that 51.5% of the surveyed restaurants have continued to offer delivery through third-party services, and 26.8% are still providing self-delivery. Curbside delivery and other forms of takeout service is still available from 84.6% of the respondents, and 41.5% are still offering alcoholic beverages for off-premise consumption, an illegal activity in pre-COVID-19 days.

About 15% have continued to sell grocery-type products such as milk, butter and toilet paper.

Even with the new and ongoing activities, the survey found that restaurateurs are still wincing from the coronavirus’s impact. Respondents were asked to rate their economic and emotional pain from the pandemic from a low of 0 to a high of 100%. The mean answer was just under 80%.

Sixty percent said they do not expect to see a profit from their operations within the next 6 months.