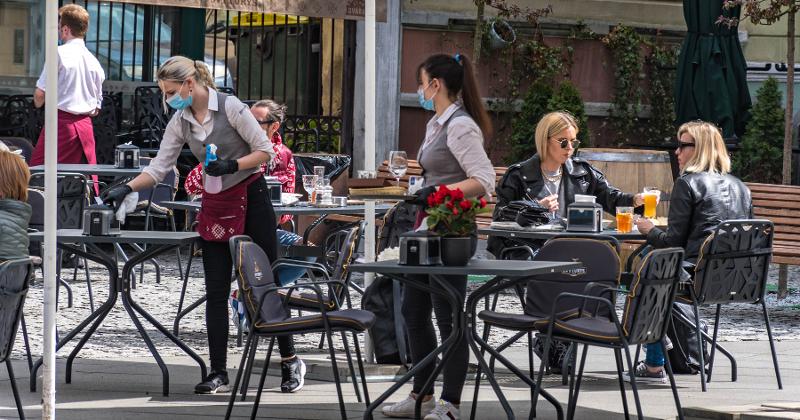 With coronavirus cases rising in half of all states, and a number of restaurants opting to reclose after employees tested positive for the coronavirus, a growing number of jurisdictions are considering rolling back their reopening plans.

“Because the spread is so rapid right now, there’s never a reason for you to leave your home, unless you need to go out,” Abbott said in a local TV interview, adding that the state could increase its restrictions and that it is stepping up enforcement in public places such as bars to ensure there’s no overcrowding.

In Florida, where viral rates are surging, government leaders are calling for everyone to wear face masks and several municipalities are stepping up enforcement of safety rules at restaurants and bars.

The Knight's Pub, which is popular with college students in Orlando, lost its liquor license this week after more than 40 people there, both employees and customers, contracted the virus.

The pub's owner said in a statement that his business is being used as a "scapegoat" and that his limited reopening was sanctioned by the state's leaders.

Earlier this week, California Gov. Gavin Newsom warned that the state could be forced to roll back its reopening if residents do not properly social distance and wear masks.

“It’s your individual decision-making that will determine our fate and future,” Gov. Gavin Newsom said during a virtual press conference.

Also in California, a coalition of unions representing 17,000 Disneyland employees sent a letter to the governor demanding he prevent the theme parks from reopening next month due to safety concerns.

Nashville, meanwhile, entered its third reopening phase on Monday even as its new coronavirus cases grow. The latest phase allows restaurants and bars serving food to operate at 75% capacity. Earlier this month, the city’s mayor decided to delay the rollout of the new reopening phase after seeing an uptick in cases.

Nashville will stay in this latest phase for at least four weeks, the mayor said, potentially longer.

In Memphis, Shelby County Mayor Lee Harris said the area is prepared to move back to phase one if necessary, after already extending phase two guidelines twice because of data-driven recommendations.

New York Gov. Andrew Cuomo has repeatedly warned bars and restaurants in recent weeks that they could forfeit their liquor licenses if they violate reopening rules. The state had received 25,000 complaints earlier this month regarding social distancing violations and bars and restaurants ignoring safety protocols.

In Florida, where viral rates are surging, government leaders are calling for everyone to wear face masks and several municipalities are stepping up enforcement of safety rules at restaurants and bars.

In Maine, the governor announced Monday that the state will postpone the reopening of indoor bar service “until further notice” after previously stating they would reopen on July 1. The high risk for crowds and the limited ability for social distancing and mask-wearing prompted the decision, according to the state’s leaders.

Even some restaurant operators are coming to terms with the prospect of potentially having to close if case numbers keep climbing.

"The case loads in Florida, Alabama, and in Las Vegas are climbing," Ark Restaurants CEO Michael Weinstein told analysts this week. "I know there’s every intent upon government to keep these places open, but if we have cases in our restaurants and it becomes obvious that we're endangering our employees or our customers by remaining open, we're probably going to be faced with a decision that I see every business in the United States faced with."