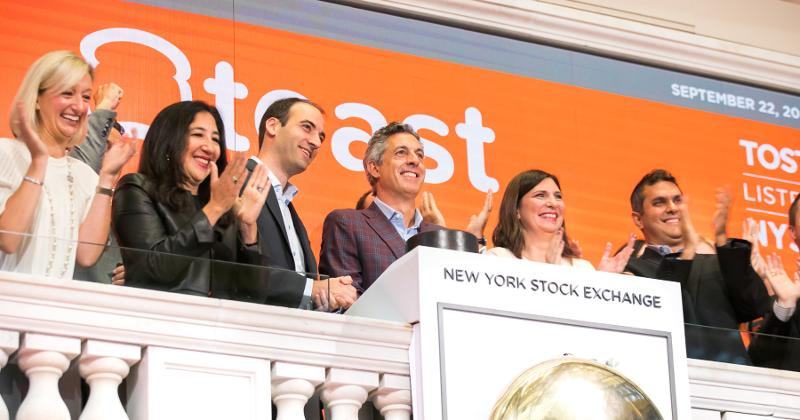 These days, though, what used to be a restaurant’s bread and butter might only get it so far, said Aman Narang, co-founder and COO of Toast.

“You also need a really good technology platform,” he said.

The 10-year-old company wants to be restaurants’ go-to provider of such a platform, and it marked a milestone in that effort Wednesday with its debut on the New York Stock Exchange.

Shares initially priced at $40 surged more than 60% in early morning trading, a sign of the booming demand for restaurant technology in the pandemic era. The initial public offering brought in about $870 million for the Boston-based company, valuing it at close to $20 billion.

“Some of these valuations and the after-IPO reactions have been pretty tremendous,” said Lauren Silberman, restaurant industry analyst with Credit Suisse. “Clearly there’s demand for this type of business, and the interest on the restaurant side is clear.”

Toast will invest the funds in growing its technology, a so-called “end-to-end” platform that covers everything from POS and kitchen display systems to handheld server tablets, marketing and payroll software and more. Unlike many tech companies that focus solely on restaurants of a certain size or segment, Narang said Toast wants to work with restaurants of all kinds.

“All restaurants can benefit from this platform,” he said.

The IPO caps a remarkable turnaround for the company that laid off half of its staff in April 2020, shortly after the pandemic struck.

“When COVID first hit, none of us knew what had hit us,” Narang said Wednesday from the lobby of the NYSE. As restaurants stumbled through those early weeks of stay-at-home orders and dining room shutdowns, so did Toast—until the need for tech-enabled lifelines like online ordering, delivery and curbside pickup became clear.

Toast went on to grow rapidly in the months that followed. As of the end of June, it was generating $494 million in annual recurring revenue, an increase of 118% year over year. It had more than 29,000 customers representing nearly 48,000 restaurant locations, up from just over 33,000 locations the year prior.

“What restaurateurs are realizing more and more is that technology can be easy and accessible,” he said. “There’s so much value in having an end-to-end platform and leveraging it to run a great business.”

While technology has proven to be a powerful tool for restaurants, it’s not without its challenges. The sheer number of products available today can be overwhelming, and getting them to integrate and work together is complicated. That’s one of the issues Toast wants to ease for restaurants, Narang said.

“Making the stuff easy and accessible … it’s hard work, and that is a big part of what we’re excited about,” he said. “What customers should know is we’re going to invest in this platform on their behalf.”

Toast is the second big restaurant tech IPO of the year, following Olo’s successful debut in March. Meanwhile, lots of restaurant companies are going public as well. Both sectors are booming, and the IPO activity is likely far from over, Silberman said.

“I think that both tech companies as well as restaurant companies are seeing opportunities to take capital and make great returns because of the accelerated accessible market,” she said.