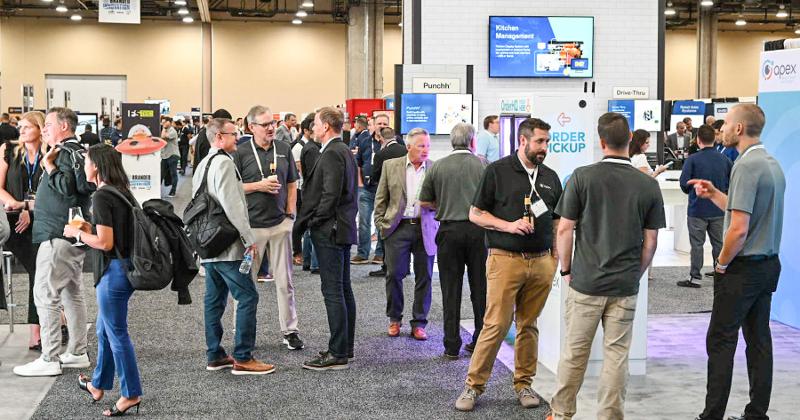 The annual FSTEC conference was back and bigger than ever this year, drawing more than 1,000 attendees to the Gaylord Texan resort in Dallas this week.

It arrived at a tenuous time for both restaurants and tech suppliers, which are each feeling the effects of rising costs and a slowing economy. The large turnout only underscored how important technology has become in today’s industry.

Here are seven headlines that rose from the event, which is owned and operated by Restaurant Business parent company Winsight.

More than 800 operators attended the event, roughly double last year’s turnout, in case there was any doubt that tech is an important part of the business.

Indeed, panelists and presenters repeatedly highlighted how integral their IT departments have become in everything from marketing to serving food.

“Technology is in everything that we do,” said Brinker International CEO Kevin Hochman during a Q&A on Wednesday.

Hochman seemed to speak for many operators when he said Brinker is steering its investments toward “practical tech” rather than headline-grabbing innovations that could take years to implement.

It comes as restaurants are facing immediate business problems, particularly on the bottom line.

With that in mind, operators said any prospective tech partner needs to show a clear ROI. And the product should in some way improve the customer or employee experience.

If they can do that, “now you have my attention,” said Sean Thompson, IT director for Freddy’s Frozen Custard.

“Getting the POS working is pretty much the priority right now,” said Focus Brands CTO Tim Voss when asked about the metaverse.

That could be why we saw fewer robots.

Robots were one of the highlights of last year’s event and seemed to reach critical mass at the National Restaurant Association Show in May. But they were largely absent from the FSTEC floor this year.

The reasons for that are unclear. But attendees’ feelings about robots were clearly mixed.

Some said their operations just weren’t there yet or that they were hesitant to insert robots between employees and guests. Others expressed interest in the technology.

Church’s Chicken, for instance, is looking at using them to cook chicken.

“Working in a greasy environment such as Church’s is not as glamorous as working in other places,” said Luis de la Torre, VP of global ops services for the chain.

But AI voice bots stood out.

If we had to pick one star of the show this year, it would be conversational voice bots that can answer the phone or take drive-thru orders.

Executives from Brinker, Inspire Brands, Dine Brands and others said their companies were either testing or considering AI voice, and some operations, like Checkers, are already well out of the gate with the technology.

The idea, operators said, is to ease employees’ workload. And while it might seem like a lighter lift compared to a physical robot, at least one chain hinted that there’s considerable trial and error involved.

“The biggest surprise is just how many different ways that we as humans communicate and trying to code that into a machine,” said Lisa Ingram, CEO of White Castle, which has been testing a voice bot called Julia at two locations.

“She’s not yet where we want her to be but she improves every single week,” Ingram said.

And the jury is still out on kiosks.

Though the in-store ordering options had a noticeable presence on the trade show floor, operators’ opinion of them was ambivalent at best. A few reiterated the common refrain that every consumer now has a kiosk in their pocket. At White Castle, results have been mixed.

“Some customers really love them, and other customers would rather go up and talk to a team member and order that way,” Ingram said.

Airlines continue to be a source for ideas.

The buzz around dynamic pricing, which has been a staple at airlines for years, went up another few decibels at this year’s event. But not everyone was fully on board with bringing the technology to restaurants.

“I don’t want to get to a stage where I walk in somewhere and I’m paying a different price than someone at the table next to me,” Voss said. “But we need to get smarter about changing price based on COGs.”

Another innovation that restaurants could lift from airlines: Allowing diners to select their own seats. “You know how many thousands of labor hours and millions of dollars we spend on hosts every year?” Hochman of Brinker said. “Maybe we should make that an option for guests.”

The future of virtual brands is uncertain.

Delivery-only restaurants were a frequent topic of discussion, with many attendees posing a similar question: What happens to brands designed to fill excess capacity when that excess capacity is gone?

Hochman provided a good illustration of the issue, describing how Chili’s virtual offshoot It’s Just Wings tends to get busy at the same time Chili’s does, which can create headaches in the kitchen.

“It’s a big part of our business,” he said, but “it’s not going to be the thing that I think some people think it could be.”

Others argued that too many orders are better than too few.

“The economics at any level are still challenging,” said Stephanie Sollers, CEO of MrBeast Burger parent Virtual Dining Concepts. “You still need to have extra revenue sources that you can count on.”